Riding off from my new friends at the drum club I began to make my way once again towards Temple 1, near the town of Naruto.
The ride started off nicely along the coast before popping me up and over some more of the ubiquitous Japanese mountains.  It got pretty steep and this became more obvious when a guy out running overtook me.

On the way down I saw more Japanese wildlife, another reminder that the densely populated urban areas are only a small part of the country.

At Temple 1 the atmosphere felt different than it had at the previous ones I’d visited.  Before, most of the pilgrims I’d seen had been coming towards the end of their trips.  Now everyone was beginning, they seemed fresher and definitely a lot cleaner than the ones I’d been seeing.  The white of their pilgrims’ attire positively shining.

Two Henro pose before the start of their adventure

I wondered how many would make it round. Already after six days cycling the route I could see how tough it must be to walk it.

At Temple 1 I finally managed to pick up an English guidebook to the pilgrimage.  While I’d been finding the temples fine with my Japanese map book I felt I’d been missing out on a lot of other information.  The English guide had detail on many aspects of the pilgrimage and how to undertake it. It also included information on each temple and the surrounding areas that I hoped would make the final two thirds more rewarding. 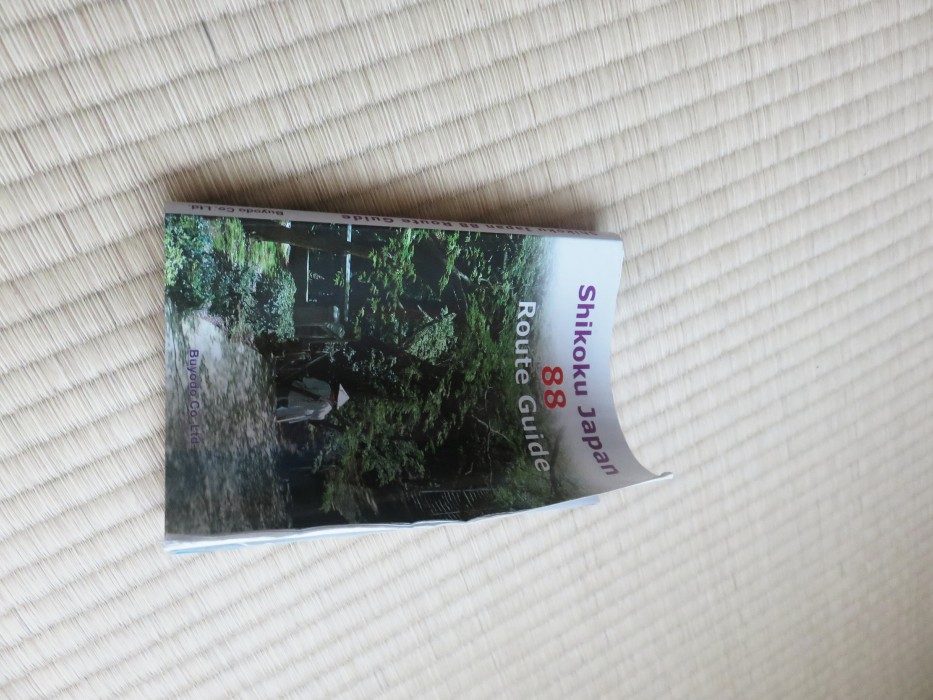 There are a large number of temples clustered close to 1, so I began hammering through these in a whirl.  Some were on the flat and a few on small hills.  They all had their own bits of character.

I met Darren at one temple, an Australian doing the pilgrimage totally on foot. He had a long way to go but seemed well prepared.

As the temples were mostly quite close together I kept pushing on to the next one and didn’t eat lunch.  Eventually I could feel my energy going, so I stopped at a 711 to devour a couple of instant noodles I’d received as presents from different people.

This meant I could continue on and reach Temple 11 as the afternoon drew to a close.

I was quite pleased with my progress.  11 temples in one day hadn’t been easy.  Each temple itself takes up time just to look around.  I wasn’t just riding up and touching the entrance post to have done it, I wanted to see in each temple precinct too.

I knew that 11, would be my last for the day.  Temple 12: Shosanji is considered as one of the harder temples to reach being up on another mountain. So having stocked up on food I decided to ride up as far as I could and camp before visiting the temple in the morning.

Again it turned out I wasn’t taking the standard walking or driving route ending up on another seldom used road up the mountain.
I rode up and up surprising some Japanese ladies farming their isolated land.  They seemed to confirm I could take this way but that it would continue up and up…

Off I went keeping my eye out for somewhere to camp but remaining disappointed as flat land was again at a premium. Reaching a pass as darkness was really falling I saw a dirt side road I thought might be likely and started up that.  Almost straight a way a small truck began coming towards me so I backed out and explained I needed somewhere to camp to the occupants.
They said there was an onsen, or Japanese spa, with some flat ground further down.  This sounded good so I began descending, to my disappointment as I knew I’d be going back up again tomorrow as the temple was pretty high.
As I went down I began to get worried as no onsen was presenting itself and I’d gone further than the kilometre they’d said.

Then I saw a building which was possibly what I was looking for and decided to ask there.
A lady cleaning outside confirmed it was an onsen and she said I could camp down by the car park.

It turned out the spot I pitched up on was not at all where she meant. I was basically on a large verge by the side of the road. I later found that there was a proper area with grass and running water round the side… Not that it mattered in the end as I got a good sleep.
Once I was pitched up I headed to the onsen to get clean and soak in their hot springs.  It felt great after a long ride. 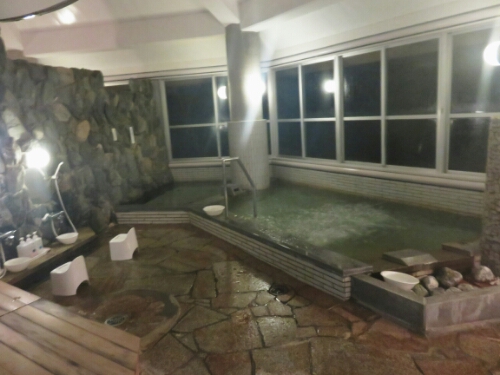 I woke up to a hard morning’s climb to Temple 12, which it has to be said was worth it.  The temple was very nice and had a lot of statuary and all set amongst huge trees. 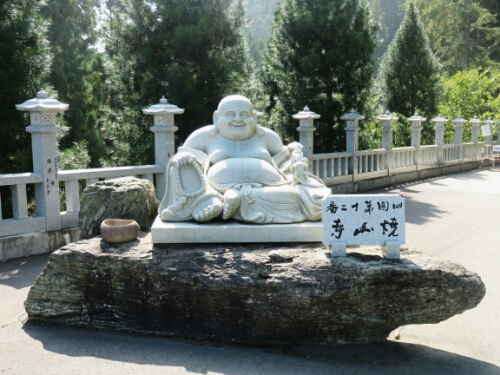 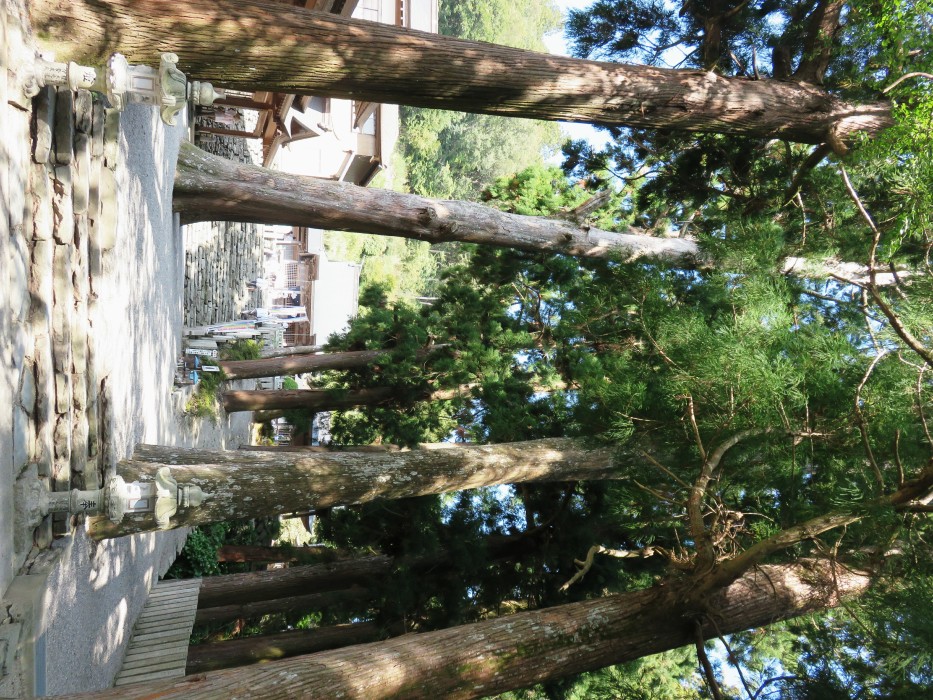 Given its relative inaccessibility, it was still quite busy up there, with a load or two of bus henro. I’ve heard these described as ‘instant henro’, packed on their tour buses cutting out all the difficulty of the pilgrimage.  Still they all seem to enjoy themselves immensely and I guess that’s the point.

It was another hair raising descent off the mountain on steep narrow roads, you really can’t let off the brakes for more than a second at a time.  At the bottom I met Gina, an American who was walking part and bussing longer sections of the route.  She was doing the pilgrimage to remember her mother and it seemed very important to her.  She was carrying with her a large tube which she said had scrolls in which she was getting stamped.  I’d seen pilgrims with them before and had been curious.  Apparently this was another way of commemorating the journey.

Carrying on down along an incredibly beautiful river valley I met another Brit doing the walk.  This was Jim from Norwich, who at 70 years old was walking the entire thing.  He was incredibly cheerful and seemed to be powered by self help courses, the sayings from which he was keen to share.  Suggesting I should shout ‘Adam’s alive’ whenever I’m at a tough bit. Clearly they are doing him some good as he was in fine form!

Carrying on to Temple 13 I passed through a village that seemed entirely populated by life size stuffed dolls. Eerie to say the least. 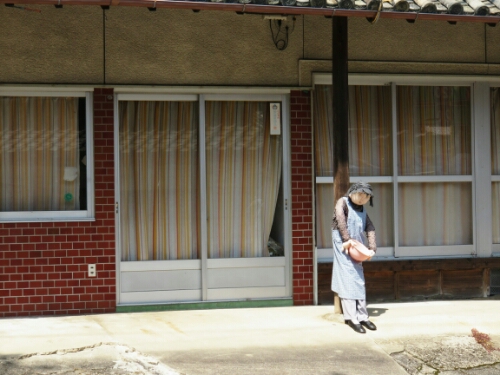 At the bottom I whizzed through temples 13 to 17 as they were all on the flat.

As I went I was keeping up with people in cars and buses from Temple 12, which was nice as everyone always has a smile.  They tend to spend a while worshipping while I just look around.

At Temple 17, some nice ladies gave me some osettai, or gifts for pilgrims, I’m not sure what it all was but it was in a nice bag.

After this it was time to head to the Warmshowers.org hosts I’d arranged to stay with: Emma and Hide. They very kindly put me up for the night and made me a lovely fish supper.

Saddling up and leaving Emma and Hide’s I realised I needed a rest day so I decided to ride to the nearby city of Tokushima and rest there are try and find a host for the night.  If not I could camp.

Thankfully Agustin, a Spaniard studying in Japan responded and I was able to stay at his. We had a nice dinner together and I felt a lot more energetic the next morning.