In Mobile I was very glad I’d been lucky enough to be hosted by Ken, not least because it was the coldest night I’d traveled through since last winter. The temperature got down to around minus 6 Celsius, which is no fun in the tent.

Riding the next morning it felt even colder with the wind chill dropping the mercury further. It was absolutely bitter and my water bottles froze rock solid. This did make me glad that I’d taken the southern route because if it was this cold in Alabama I didn’t want to know how cold it would be even further north!

It was also a good reminder of how little fun riding in real winter can be, especially when you’re under equipped. My feet felt like blocks of ice and I yearned for my Baffin polar boots which had kept my feet toasty last year.
At least here I wasn’t in the desert and there was enough shelter if it got too cold for my gear to handle.
Riding out of Mobile I crossed some exposed causeways which were very cold but also very beautiful.
I also saw the USS Alabama, a WWII battleship that was moored up near Mobile as a museum ship. 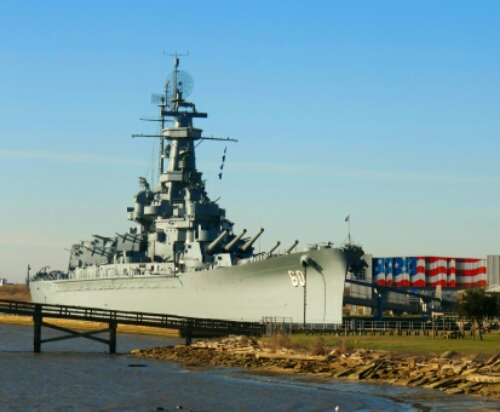 Mostly I just tried to ignore the cold, with no great success!

For me the bottom sign would negate the need for the top one...

It wasn’t much longer and I was in my fourth state in three days: Florida. This was quite exciting as this was to be my last US state. I was getting very close to finishing this leg of the trip.

That day it was living up to its sunshine state nickname even if it was a littler colder than I’d been led to expect.
Florida also had better roads than the the past three states I had been through. There was a nice little shoulder that was in many cases specifically for cyclists. They also had proper cycle lanes a lot of the time even for when there was an intersection, these let the cyclists continue across safely.

It made me feel a bit more confident being in a state that clearly understood that cyclists exist. In the other southern states I had started to wonder…

I'd personally rely on a good plan for sustainable fishing...

That night I was glad that I had arranged another Warmshowers host as the weather was again supposed to be the wrong side of freezing. I managed to arrive at Al and Sylvia’s without turning into a total icicle and thanks to their kindness was soon able to warm up. They were an interesting couple: Al is a retired military and commercial helicopter pilot with some ideas that were new to me; not least among these was the ‘fact’ that President Obama is a Muslim. Sylvia is a local author with a number of books on Amazon available which I am sure are a good read.

Continuing on the next day it had warmed up a little bit but I still spent most of the day with uncomfortably chilly feet: two pairs of socks were really not doing the trick.

The day was also rather boring with not much happening along the road. Interminable woods with the occasional section of swamp were the rule and I spent most of the ride listening to music.
That evening I had originally planned on camping but it was still cold and I had arranged to be in Tallahassee in two days, which was 180 miles from Milton where i had stayed with Al and Sylvia. This meant I needed to made a fair few miles that day and I ended up riding later than I would have liked. I also ended up near a small town, called Chipley, so I decided to try and find a cheap motel.
This I achieved. It was the cheapest motel of the trip so far and still a lot better than America’s Best Value Inn in Seguin. I only saw one cockroach the whole evening for instance.
Staying in a town also meant I got to enjoy some good food and I surprised myself by eating a whole 14″ pizza myself without blinking.

Sadly I have no photos for the next two days as I foolishly managed to lose my SD card. Fortunately I backup fairly regularly so I didn’t lose a huge chunk of pictures. I don’t remember there being anything particularly interesting either.

The day’s ride to Tallahassee was OK. The weather was back to a bearable temperature and the landscape was quite pretty. I ate some BBQ ribs from a mobile BBQ joint with its own smoker. Those were delicious and the larger than life owner very pleasant as well.

I also went past a Florida Correctional Facility with signs in the road warning of prisoners working. There were none out at the time I came past and I just got to see the standard large institutional buildings.

I got into Tallahassee with no trouble and rode to my Warmshowers.org host for the evening: Ky. Ky was a student studying in the city and it was nostalgic to see the inside of the student home he shared with a bunch of other guys. That evening we went along to a microbrewery/bar where one of his friends was playing and I got to hear some good music, though I didn’t partake of the beer.

The next morning I headed out early and began working once more across Florida. Tallahassee is the midpoint between Pensacola and Saint Augustine, which were the two main contenders for state capital, which is why it was selected as the state capital. This meant I was pretty much halfway across the state and closing in on the coast.

It was another uninspiring day, notable only in that I lost my SD card and that I passed through Madison County. Later I learnt it wasn’t the one from the film which is why I didn’t see any bridges. 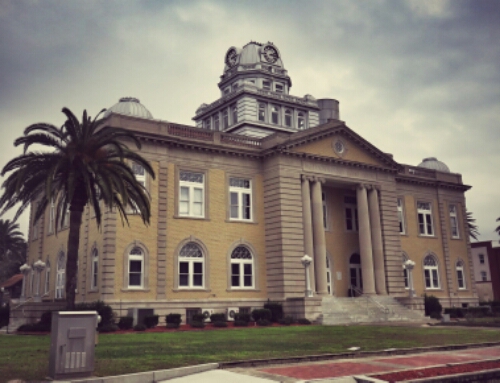 That evening I had some more trouble finding a camp spot but in the end pitched up behind some trees and bushes off the road. 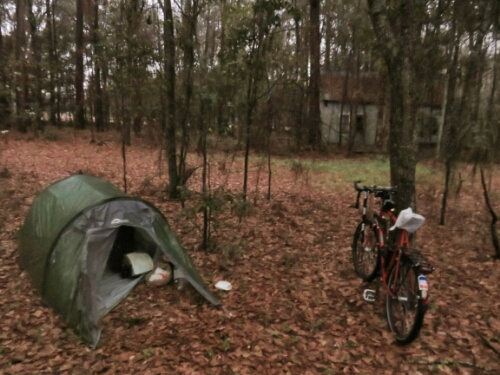 It was so dark when I found the spot that I didn’t even notice the building that was just behind me until the morning. Luckily it must have been abandoned.

Not long after I woke up a thunderstorm began. It was a pretty big one that passed fairly close. It was the first time I could remember lightning strikes actually making my tent light up.
Once it had passed over I got packed up and started riding. The first part of the day was just damp, there wasn’t much rain, just a light mist. Unfortunately come lunch time it started to tip it down again and another thunderstorm came in. Most of this I saw on the bike, huge lightning bolts were hitting the earth not that far away causing thunder to blossom across the sky. I’ve often wondered if it is safe to cycle during a thunderstorm and apparently the answer is that it is as safe as taking a walk in the same storm. Though this article made me nervous.

That day I was to stay with a Warmshowers.org host in Gainesville so I kept on riding to reach the town, which I eventually did. I then spent about an hour and a half trying to find my hosts place due to a mix of my own stupidity, Gainesville’s confusing street layout and rain making googlemaps hard to use.
Gainesville really does have a confusing street naming convention; to start with most streets are numbered but then there are a lot of different types of street using the same number. So there might be a 40th Street, 40th Lane, 40th Avenue and so on. My first error was to put my host’s address in to googlemaps with the right number and wrong type of road. I ended up about four miles away.
Then it became apparent that a road called 48th Avenue, for instance, doesn’t run in a straight unbroken line from start to finish. Instead it runs across the town with breaks in it if there is something that the road can’t go through – like areas of wetland. This means that if I found the road I was looking for, I might not have found the right part of it. This was somewhat frustrating but would probably have been OK if I had put the right data into googlemaps in the first place!

I finally reached Nicole and Jack’s place where I was given a warm welcome in spite of being late, which made it all worthwhile.