Riding off the canal paths in Phoenix was a fairly worrying affair. Huge pickup trucks would whizz by very close and drivers didn’t seem too courteous. Luckily the day before I’d covered most of the city and quite soon I was out of the really urban areas.

I was merrily riding along following Googlemaps’ recommended route out of Phoenix and towards my next destination: Safford, when I hit a problem.  There was a locked gate across the path I was supposed to take… Thanks Google!

Luckily as I approached a man drove up to the gate and unlocked it. I asked him if I could go through and get to the highway. He was not very convincing but said I could probably get through on rocky tracks but I might have to climb over gates if they were locked.
Normally I’d have turned back and tried to find another route but I was feeling adventurous so I went through the gate and he locked it behind me.

I rode on what was now dirt track for a couple of miles until I reached another gate and another choice.
This one had big signs saying No Trespassing and that threatened prosecution for those disobeying.  There was also another smaller sign saying non motorised vehicles were allowed… With a permit.
I clearly didn’t have a permit nor was I going to get one. So I ummed and ahhed and next thing I knew I’d carried my bike over the gate and I was nervously riding off, expecting to be caught any second. This was behaviour very unlike me and I wasn’t sure what had come over me!

The road at least was packed dirt at this stage and easy to ride on. Until, next thing Google was telling me to take a left turn which would involve another gate and an unpacked dirt road. Still in for a penny in for a pound and now I really didn’t want to turn back.

I managed to haul my bike up and over and now I was riding off on really indistinct trails.  I’d only been thinking the day before it would be nice to go off road a bit in the desert and here I was, wish fulfilled courtesy of Google.  Still, I was pretty worried all the time, I wouldn’t normally ignore no trespassing signs and I never would have earlier if the man earlier hadn’t said I could get through. 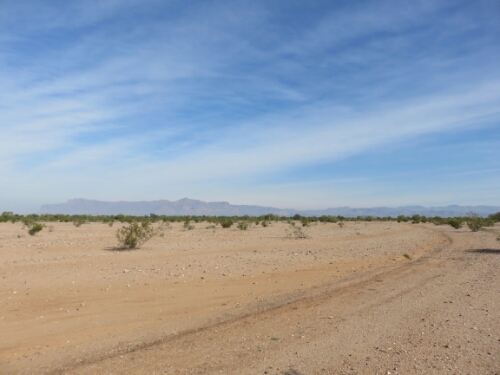 I was having to push my bicycle at some points because the road got so sandy or rocky I couldn’t get traction. I was only worried about getting caught trespassing as I had a lot of water, food, a compass and a map so I knew if I kept east I’d eventually hit the highway I was after.
Every time I heard a plane I winced as I knew that in America the police used them as spotters.
Luckily I carried on unbothered through beautiful desert with more amazing cacti. 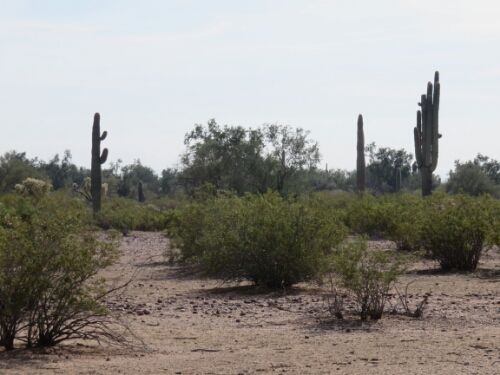 Eventually after grinding along on the track, which was literally just the tracks left by a 4×4, I reached another gate. This one was unlocked so I passed through this and into an area with marked trails, I assume for tourists. I felt a bit more confident now and after riding a few more miles I reached the highway, riding nonchalantly out confident I’d gotten away with it.

I thought I was home free for the day and that I’d done the hard part.  Next thing I knew Google had taken me off the highway on to a side road, it was sealed and good quality so I wasn’t too worried.  It wasn’t long though, until, you guessed it, I was on another dirt road riding through part of Tonto National Forest.
This was incredibly beautiful but also hard going.

At least I knew I was allowed to be here. Finally this road again came back to the highway and I decided that was enough adventures for one day. I was going to ignore Google and keep to the highway.

Thankfully this worked out and I ended up riding on a scenic route, that wound through the Superstition mountains and some beautiful rock formations.

Then I reached a tunnel I’d be warned was dangerous, I was a little nervous approaching it. When I arrived I realised that after China I would not have to fear another tunnel between here and home. This tunnel was well lit with two lanes going my way and I could see the end. If it wasn’t black as pitch with coal dust billowing around in it, with one lane each way and no end in sight I wasn’t going to worry.

The road I was on while beautiful was a climb and I was getting pretty tired when I reached the top.

After coasting down I reached Miami, not that one, and passed through to Globe where I bought a kilo of yogurt to supplement my dinner and breakfast. Yogurt is a real luxury as I have to be passing through a town shortly before I camp to buy it.

That night I’d ride a little further until night had fallen and I could safely camp a few metres from the road.

Even though I was camped in rocky scrub barely off the highway I still had a pleasant evening. I had yogurt and potato crisps a lady gave me as well as pasta and sardines to eat. There was a beautiful sky of stars and I had a good book to read.

The next morning there was one of the most stunning sunrises I’d seen, though I had to contend with tent condensation as I was at a fairly high elevation. 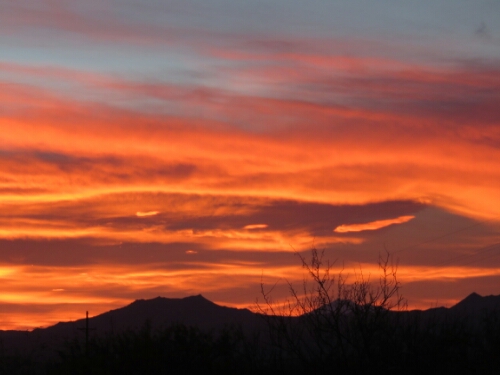 Riding on I swiftly entered Apache country, in the form of the San Carlos Apache Reservation.

This was like entering yet another film for me. The Apache were a people that I only knew from westerns and it was quite strange to actually meet some, especially in a supermarket. The reservation seemed very poor, the only wealth in view was at the casino.
Everyone was very friendly though, more so than almost anywhere else and I got asked a lot about my trip.

Whilst riding in the reservation I ran into Ryan who was just of for stroll. Across the whole of America. He’d already made it from Virginia Beach to Arizona so I’m sure he will have no trouble with the rest of his trip. 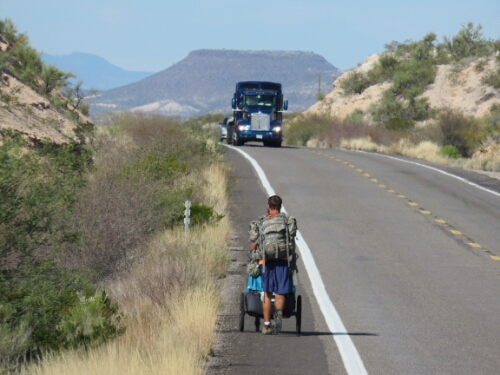 After leaving the reservation I made good time to my destination of Safford, riding through cotton fields on the way. It was strange to see cotton again as the last time is seem it had been this time last year in Uzbekistan. 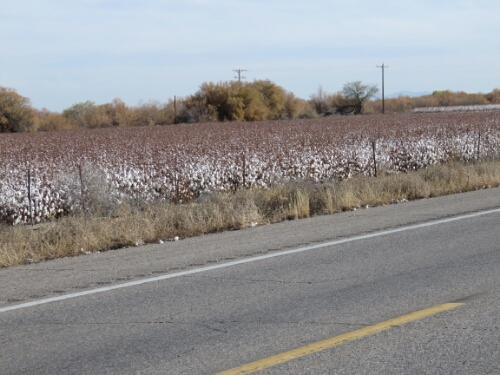 In Safford I met my Warmshowers.org host Mons, who kindly took me in for a couple of nights.