I’d initially only planned on staying one night in the town of Healdsburg but I’d had such a rotten time on the ride there that I asked Taya, my Warmshowers host, if I could stay another night.
She’d been so kind that I didn’t feel uncomfortable doing so and I was glad when she accepted.
The next day I decided on switching my tires round as I’d had a very bad puncture on the previous day’s ride and I wanted the better tire on the more vulnerable rear wheel.  I thought this would be an annoying but relatively simple job.  I was wrong.
Firstly it took a lot longer to clean my bike than expected, then switching the tires was a pain.  So after about two hours I thought I was done and so I began reinflating my tires.  Everything seemed OK until I was reaching the desired pressure when all of a sudden my inner tube exploded.  This doesn’t normally happen and I was left a little shocked.  I was down a tube as well as the hole was about six inches long by three across and I didn’t have any patches that big.
Luckily Taya was nice enough to drive me to the local bike shop to get a new spare. I took my tire with me to see if they could tell me if the problem was to do with the puncture I’d had.
Apparently it was, the puncture was so big the tire was dead, deceased, caput. I’d gone over a shard of glass that’d hammered right through and left a hole that was preventing the tire from sealing the inner tube in correctly under pressure.
I’d need a new tire and I could not believe it. The tires I had were supposed to be bomb proof and I’d somehow ruined one.  American roads were turning out to be bad luck!
Sadly the shop didn’t stock Schwalbe tires in the size I needed or in fact any tire in the right size.  So we headed home and I was initially going to put my old tire back on to get to San Francisco where I hoped to get a replacement. Taya pointed out that I could ring round shops to check their stock, which blew my mind as I’d completely lost the mindset that would have allowed me to think like that.  In the end no shops had a direct replacement so I ended up with a new brand of tire when Taya offered to drive me to Santa Rosa to pick one up.  Hopefully it’ll work out.
Somehow I managed to blow the inner tube on the other tire when I fully inflated that too, probably because I had it seated incorrectly.  I was not having a good day with tires.
All in all it was lucky I’d decided to switch the tires or I might have discovered the problem when on the road which would have been much harder to fix and possibly dangerous if it had blown while riding. What I do know is that if I hadn’t been staying with Taya my life would have been a lot more difficult.
The next day I went down to check my bike with trepidation, half expecting to find deflated tires or worse. Luckily everything was fine and after a delicious breakfast I started off towards San Francisco.
This was to be my first American city on this trip and I was quite excited.

Getting there was not easy, I was now no longer allowed on the freeway and had to take a complicated series of frontage roads and cycle paths. Luckily Taya had kindly printed the directions for me and I was able follow these and my phone fairly closely. 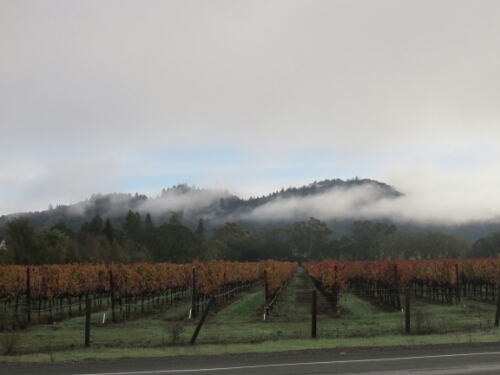 The weather had improved and the rain was thankfully gone so I felt much more cheerful as I went.

I was riding through urban areas for longer periods than at any point in the States before and I had to adapt my riding to deal with more traffic lights and junctions than I was used to now. 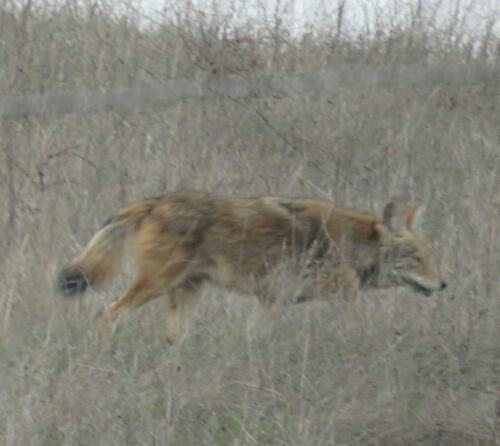 As twilight started to creep up I reached the beginnings of SF spotting first Alcatraz and then that most iconic of bridges: the Golden Gate.

Once on the other side I was expecting a nightmare of a cycling city that would be hard to navigate, especially at night.  In the end it wasn’t too bad and I made it to my Warmshowers host with little trouble. Admittedly the hills were no fun.

I hadn’t heard back from Helen, my host, since I confirmed I’d be happy pitching my tent on the roof of the building where she lived so I was a little nervous she wasn’t expecting me.  I became even more nervous when she wasn’t in when I arrived and none of her housemates who were around could reach her.
Helen had a lot of housemates it transpired, 25 in all, though I must have met only half that.
Thankfully she arrived back not too long after I turned up and she was expecting me.  Also I wouldn’t be sleeping on the roof, instead I’d be sleeping on the bunk on top of her room mates bed.  Well kind of room mate as Helen effectively lived in his closet… A very big closet but a very small room.
It turned out I was staying in an artists collective and there was a lot of creativity going on.  I felt a bit out of place as I was still somewhat in wilderness mode and the city and meeting so many people was a little overwhelming.  Luckily everyone there was very nice and made me welcome.

The next day I wandered out into San Francisco keen to see the city for myself.  Most of it’s very walkable as the city is only 7 miles by 7.

The hills really do give it its own character and some of them are surprisingly steep. 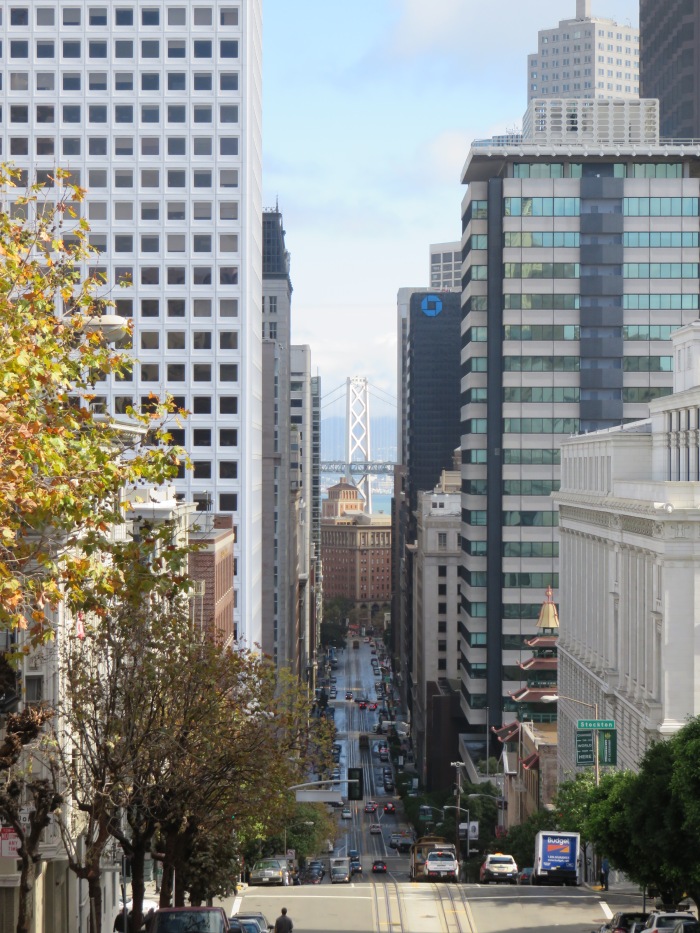 You can still ride on the original trolley buses if you’re willing to pay $6, I wasn’t.

The city had very startling demarcations between rich and poor, as I was able to cross the road from an incredibly affluent area into a neighbourhood where most of the people seemed to live on the streets.
It was also a very beautiful city with its changes in altitude and many lovely buildings working together to create something special.

I decided to leave the next day as I felt a bit restless already and was missing the road.
It turns out early Sunday morning is an excellent time to leave SF as there was almost no traffic to start with. 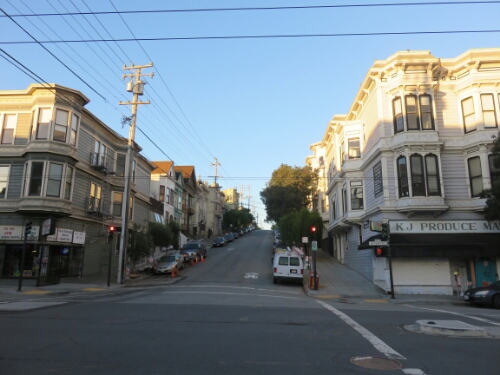 I felt very safe especially as I went through Golden Gate Park for about half the distance in the city.
Unfortunately, once I’d left SF itself, things got complicated and I had to take another windy route in order to stay off the main roads.
Luckily when I was really confused about the best way to take, as has happened before in the past, some kind cyclists appeared as if by magic.  This time it was Mark and Frank, who were out for their Sunday morning ride. They were kind enough to not only explain the best route I should take but to lead me along to its start. 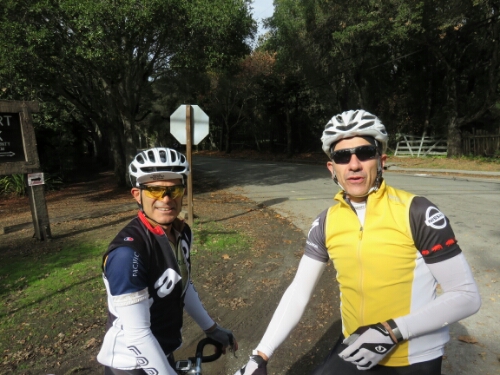 Following them and their advice I got a beautiful ride up along the San Andreas fault and over some hills to avoid the highway.
Eventually I made it back to the coast so I could head once more for that day’s destination: Santa Cruz.

I had some trouble finding a Warmshowers host in the city but eventually got hold of Karsten who was kind enough to say I could camp on his property.

Finding his place was pretty tough in the end, as he lived on the edge of town where there’s no street lighting. 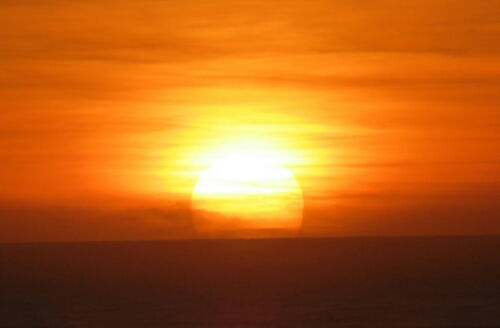 I managed in the end and pitched up in his yard hoping it was the right place as he said he would be out when I arrived.
I never actually met Karsten as I must have been asleep when he got back and he was definitely asleep when I left.

On the way out of Santa Cruz I went and had a quick look at the city’s century old boardwalk, which has a wooden rollercoaster.

Before I got kicked off the walk for having my bicycle with me by the most kindly security guard I’ve ever met. 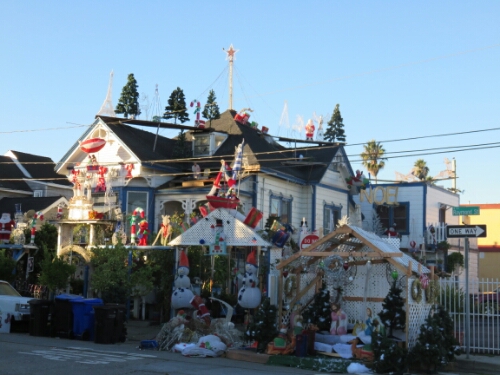 I rode out of Santa Cruz once again on a hard to follow path. I was supposed to be on the Pacific Coast bike route but the signing is intermittent and unreliable. I don’t know where I’d have ended up if another kind cyclist hadn’t happened to be coming out of the way I was incorrectly going. He set me back in the right direction.

While the route I was on was hard to follow it was at least quiet and beautiful and the day was perfect.
While I was riding along I was passed by another cyclist who slowed to match my pace so could ask me what I was up to.  He then invited me to come and see where he worked.  Which might seem strange but it turned out he worked for Calfee Design, a bicycle maker and he thought I might be interested.
I was and followed him to the building where I got a short tour.
It was really very interesting what they were doing there as they weren’t a run of the mill bike maker.  Instead they were creating high end custom carbon fibre frames and even more incredibly to me bamboo bikes.

They had some very interesting concept models as well including a bike built from a Douglas Fir.

They were also working on some cutting edge rear suspension for road bikes which was fascinating.

I was really glad I’d stopped as it opened my eyes to a while new world of bike design and they were very welcoming and clearly loved what they did there.

Carrying on I eventually made it to Castroville, self proclaimed artichoke capital of the world, where I had an artichoke wrap for lunch from a mobile dinner disturbingly named the “choke coach”.

After this I made it down to Monterey and then to the start of one of the world’s most beautiful roads down along Highway One towards Big Sur.