As I arrived into Takayama the rain thankfully stopped, so while I was still very wet I wasn’t, at least, getting wetter. Given the afternoon was already old I headed straight for the couch surfing host I was staying with’s place.

Passing the headquarters of some strange new religion on the way.

Simona, the host, was very welcoming and once I was cleaned up took me for dinner with some of her friends. After dinner we had to pick up Florian, another surfer she was hosting, there are not so many hosts in Takayama!
The next day she was kind enough not to kick us both out when she went to work so I was able to clean my bike and air my tent before I headed off to look round town.
Takayama is one of the best preserved cities in Japan due to its isolated location in the mountains. I went and visited Takayama’s Jinye, apparently the only Magistrate’s office of its period surviving in Japan.
It was moderately interesting.

But had some impressive bonsai plants on display.

After looking round I headed off out of town and found somewhere to camp.

The next day I was planning on riding the Norikura Skyline, Japan’s highest road and I had my fingers crossed for good weather.
It turned out I was lucky, it was a beautiful crisp clear autumn’s day; I couldn’t have wished for better.

As I gradually worked my way up the autumn colours began to creep in as the altitude brought the season on earlier. 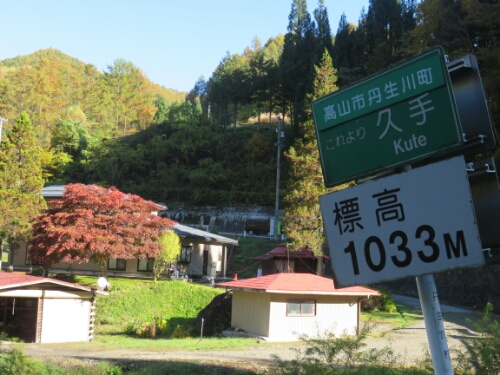 It wasn’t too long before I reached the start of the Skyline itself, it’s not a normal road as it’s only open from July to October and then only to buses, taxis and bicycles. For environmental reasons it was closed to cars completely, which suited me fine.
The man at the entrance said it was 14 km to the top, which I knew was going to be tough as I had roughly another 1000m of vertical height to get up in that distance. I was already pretty tired having already climbed about 1000m to get to the start!

It wasn’t long before the incredible views made it all worthwhile.

And they kept on getting better.

Sadly my camera coupled with my skills as a photographer can’t capture the full power off the view.  The colours seem much less vibrant in the photos and the horizon less endless.

It felt fantastic being up there and I realised how much I’d missed being up in some proper mountains, especially with perfect weather.
If I’d been just over a week later the road would have been closed.  Evidence of the snow that must fall in winter. could be seen with tall red and white poles marking where the road was.

It definitely wasn’t an easy climb and I had to take fairly regular breaks to let my legs ease out.  If there is one advantage to this it’s that it gives you a chance to appreciate the scenery.

This was the first really big climb I’d done on my own since the Great St Bernard pass in the Alps well over a year ago.  All the big Kyrgyz and Chinese ones I’d done with Meka and I was now having to force my way up without having anyone to encourage or be encouraged by. This made it a lot harder, it felt like it was just me and the mountain and the mountain wasn’t going anywhere so I was going to have to.
Eventually I managed to reach the road’s summit all the way up at 2702m. 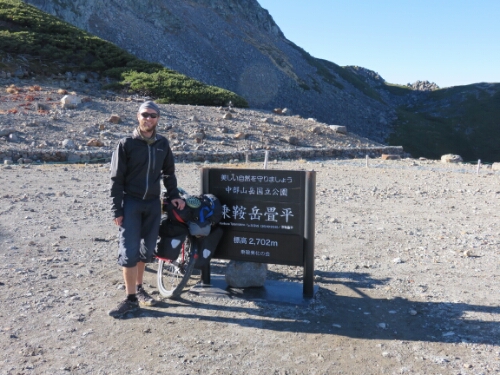 Which was nice until I found out that the actual summit of Mount Norikura was at 3052m which I’d have to hike to get up to.
I ummed and ahhed about doing the hike and decided I’d be annoyed at myself if I didn’t.
I managed to get the bike up another 100 or so metres on the gravel walking track until it stopped being off road and just became off.

The fact the a lot of the rock appeared to be pumice was interesting but a little worrying given the recent volcanic eruption that had occurred fairly nearby.

Atop the peak was a shrine and a torii gate and fantastic panoramic views.

You could literally see for miles in every direction. I was so lucky not to have been doing this a few days earlier when it would have been thoroughly miserable and probably dangerous in the rain. 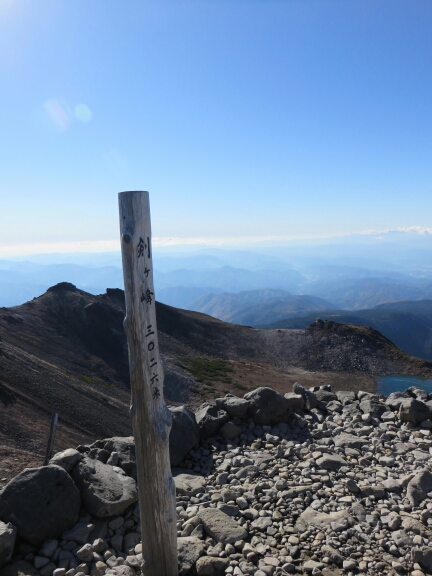 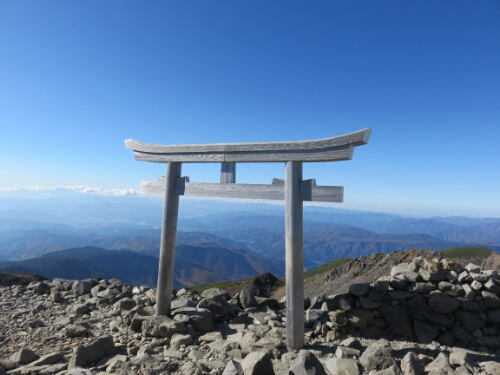 Making the hike was definitely worth it, though I felt a bit altitude sick once I’d reached the top, something I tend to be prone to.
Once back on the road I knew I’d be getting down quick so I wasn’t too worried.
At the beginning of the descent I passed into a new prefecture.

And I absolutely flew into it, even with my brakes screaming I only just managed to keep the bike on the tight mountain hair pins.

On the other side of Mount Norikura the autumn colours were much more pronounced and it was possibly more beautiful than the ascent.

Coming down it took me a bit longer than I expected to get off the mountain roads and down somewhere I could camp.  By the time I did it was pitch black and I ended up stumbling round the back of a shrine I saw a sign for and camping there.

I cleared out of there pretty quickly the next morning and headed for the nearby city of Matsumoto.

After the prior day’s exertions I wanted to have an easy morning so I drifted into the city and went looking for its castle. There are apparently four castles in Japan that are designated as national treasures and Matsumoto is one of them.
It’s easy to see why.

It’s known as the black crow for obvious reasons and was originally built as a defensive castle, though the tower on the left in the picture was added later in more peaceful times.

While I was getting ready to go and look round the castle I was approached by a Japanese gentleman who explained he was a volunteer offering free guided tours.  In most of the countries I have visited on this trip I would have been immediately suspicious of someone coming up to me like this.  In Japan I just thought that it sounded good.
So I got shown round the castle by Kiyosawa San a knowledgeable retiree with excellent English.

It really made the visit more enjoyable as he showed me round all six floors of the castle and highlighted things such as demon tiles, for warding off evil, and the castle’s hidden storey.

They even had more of the tiny bonsai trees on display, it’s fascinating how they grow them so small. 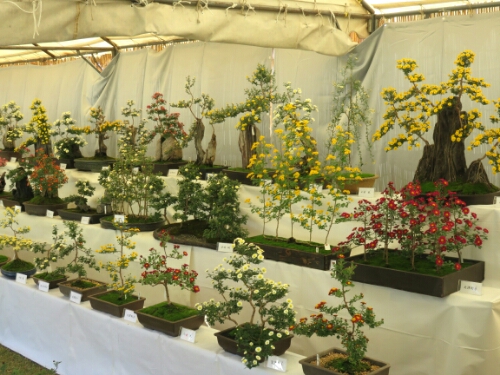 Next I rode to an onsen town that abutted Matsumoto. I’m not sure I found the most touristy bits but I did find an onsen and was thus able to get clean.

They had a helpful sign on how to behave, complete with incredibly outraged onlooker.

I then decided to cycle towards Mount Fuji to see whether I’d be able to climb it.

On the way I bumped into a university cycle touring club off on a weekend trip.  There were about twenty of them all together, I’d never seen so many tourers in one place. 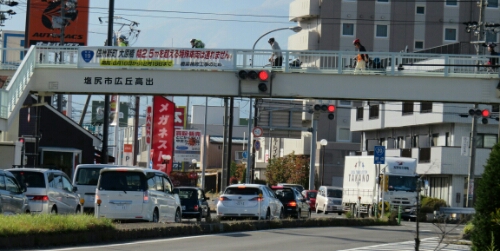 I’d expected to be just riding down from Matsumoto to get to Mount Fuji.  I was, as usual, wrong and ended up on a nice big climb.

This was one climb that was definitely worth it as I got up high enough to see Fuji from over 100km away.  That’s definitely one of the sights of the trip: a 3776m high snow capped volcano rearing up in the distance.  It’s the sort of image that it be difficult to stop and appreciate in a car but by bicycle I could keep pausing to take it in. 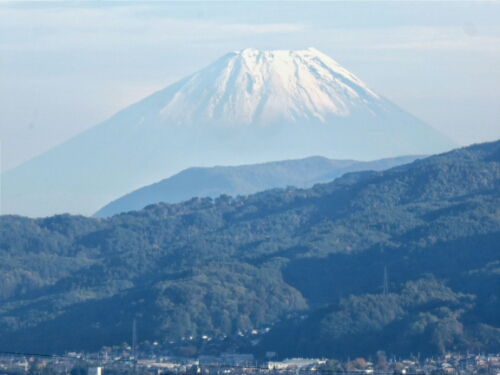 That night, as was becoming common in Japan, I left it late to find a camp spot and ended up searching in the near dark.  I managed to find another shrine but this was a tiny roadside one and I felt a little exposed.  It was also slightly sloping so it was an uncomfortable night.
When I woke in the morning it was very cold as well, very close to freezing according to my watch. It was the first day where I wished I had some of my winter gear.

My hands were like blocks of ice for the first hour of riding before the sun came out properly. Thankfully after that it was fine and I had a really pleasant day’s ride towards Fuji.
Unfortunately it was a bit cloudy so I didn’t get great views of the mountain.

Still better than nothing!

I eventually made it out of the Alps only to have to cross another small range of mountains to reach Fuji. I took a road called the Misaka Fruit line, it was obvious why it had this name. I saw giant juicy grapes, perfect peaches, kiwis and probably lemons too.

Sadly as the climb went on the weather worsened until when I reached the top it was totally grey. I had a 2km+ tunnel to negotiate then I was on the right side of the mountains for Fuji. Only I couldn’t see the mountain for clouds.

I rode down anyway planning to start in on riding up the mountain that day. I wasn’t sure at this point how far up I’d be able to get or if I could reach the summit on foot.

Eventually I found the right road up and began climbing as rain started to fall. Luckily it was a brief although unpleasant shower.
As it was getting dark I looked for somewhere to camp settling on some grass out the back of Subaruland, some sort of museum of I don’t know what.
I wasn’t too sure I should be camping there so I was as quiet and stealthy as possible.

Luckily I was undisturbed and woke to a clearer morning ready to take the mountain on, which I could now see.

I climbed up a bit further on a road that is apparently musical. It has ridges cut in it at intervals that mean as cars go over it the friction of the tires create a tune. Which tune I don’t know, I didn’t get to hear the whole thing as my bicycle didn’t make a noise.

After a couple of kilometres I reached a toll gate which I had to pay ¥200 yen at to take the road up the mountain. This seemed a bit unfair on a bicycle!

Still it was worth it. The climb was nice but not too tough as the gradient never got about 8% and was mostly around 5%.

In the end I was able to ride up to the 5th step on the mountain before I ran out of road.

It was pretty windy at the fifth station and climbing any higher was forbidden.

I was relieved to be honest. I’d climbed Fuji before and didn’t fancy getting altitude sickness in freezing weather! 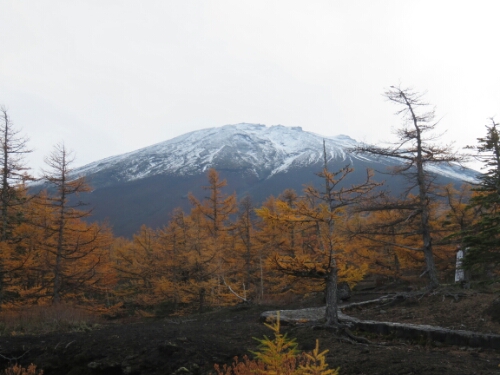 So I headed back down rather swiftly to begin working towards Tokyo.