I didn’t have a lot of plans for Busan.  I basically just wanted to have a rest and eat a lot.  Both of which I managed to do.  I also had a brief stroll along the beach but it wasn’t exactly an idyllic location for relaxation.

After a couple of nights in the city it was time to head off on another ferry to Japan.  This time when checking in I had to check my bike in as cargo.  This was a lot easier than carrying it up escalators and stairs as I had to do with the ferry from China to Korea.
The general set up of this ferry was otherwise similar to the previous ship but this time the sleeping arrangements were somewhat different.  Before I had my own bunk in a room of 50 people and even though it was a big room it had felt private as I was able to pull the curtain across my bed.  On the Korea Japan ship I was sleeping on a futon on the floor in a room with about ten other guys.  It was far less comfortable and pleasant.  That said I still got a reasonable night’s sleep, until 5am when the room lights and TV came on automatically: time to wake up.  Which would have been fine if it hadn’t been another two and a half hours before we disembarked.
The view of Busan as we had left in the evening had also been spectacular with thousands of lights scattered around the bays and hills that make up the city.  It really did look like something out of a science fiction film in parts.

Arriving in Japan was strange for a number of reasons.  Firstly because the guys at customs washed all the bicycle’s tires, I guess Korean mud is dangerous.  Secondly I had lived in Japan for a year previously, so as a country it was perhaps the most familiar to me of all the ones I had visited outside of Europe.
This meant that I recognised a lot of things and I could even communicate to a certain degree…

This was useful but also left me feeling quite frustrated as I had forgotten a lot of the Japanese I had known so sometimes I was left struggling for a word.

Leaving the port I was perhaps the least equipped navigation wise I had been for a long time. I had no map and my phone had stopped working completely in Korea.  This meant I wasn’t able to use GPS and it also made communicating with people a lot more difficult.  I now had to stop and use my bulkier tablet if I wanted to do anything.

Luckily as a developed country Japan was not short of a road sign or two.  This meant that I didn’t need GPS to tell me where I was because there was a handy piece of metal suspended by the road to do that for me.

Riding in Japan immediately felt different from Korea, this was because most of the riding I had done there had been on dedicated cycle paths.  In Japan I was riding by the side of the road or on it.  Japan does have cycle paths but unfortunately these are in most cases not fit for purpose as they are just pavements that both cyclists and pedestrians can use.  They are thus quite bumpy, often overgrown, sometimes too narrow for a bike and around villages they are used by walkers too.   Where possible I used the road but this sometimes felt uncomfortable as the roads in Japan are not very wide due to the lack of space.  So I would weave between the pavement and the road where necessary.

For most of the morning I would be riding out of Fukuoka’s conurbation; Fukuoka being the Japanese port I had pulled into.  This was of course very urbanised but wasn’t as bad as I expected and made a change from the countryside in Korea.  It also made getting food easier as I would ride past a supermarket every so often where I could pick up a cheap bento.

In the afternoon I managed to reach the north of Kyushu the island I had arrived on and the westernmost of Japan’s four main isles.  I now needed to get to Honshu; the largest of Japan’s islands.  I had read that there was an undersea tunnel that bicycles could take which I wished to pass through.
The bridge was only for cars.

After being called back as I rode towards the car only tunnel, Japan isn’t after all China, I was directed further round to the pedestrian and bicycle tunnel, which I eventually found.  It turned out to be an 800m foot tunnel very similar to the one linking Greenwich and the Isle of Dogs in London. A bit cleaner though.

Passing through the tunnel I came out on Honshu and in Shimonoseki; a historically important town given the narrowness of the straits that it overlooked between the two islands. 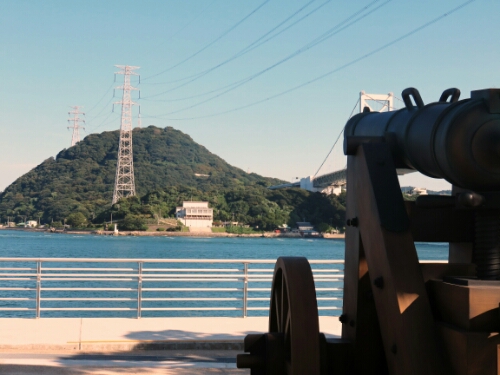 Riding onwards the road very pleasantly wound round the coast until the evening when it started heading up across some hills.  It is fair to say that Japan is not a flat country and even when you aren’t climbing you can still see hills and mountains nearby.

Japan is also an expensive country so I would have to do my best at wild camping in order to keep my budget down.  The first night I managed to find what appeared to be an undeveloped building lot to camp on.  It felt strangely like camping in the desert in China again as it was quite sandy.

It turns out camping in Japan is quite easy as there are so many convenience stores around you are never that far from running water and a toilet.  The only issue is electricity which seems a bit harder to ‘borrow’. Hopefully I’ll find a solution that’ll let me charge my electronics at a later date.

The next morning I woke early and continued on my way after making porridge with the last of my oats from China.  Quite soon I was heading over a kilometre long bridge with incredible views out to sea.

The road was certainly pretty in these parts.

As I was riding along I had to cycle around a car that had parked on the cycle lane/pavement – dangerously moving out into the road.  As I did so the man from the car said with a big smile ‘Be safety’ as he walked off.

Not much exciting happened during the day but it was certainly a nice day’s cycle and as ever there are interesting things by the side of Japanese roads like this Mini garage:

I was also enjoying being able to get food like yogurts easily as Japanese supermarkets are often close to the secondary roads and easy to access on bicycles. 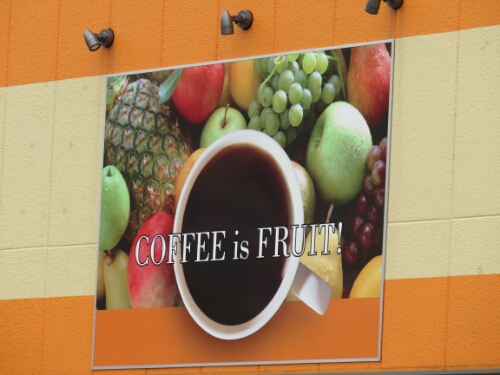 That night I wild camped again.  I pulled off into a break in the trees on a hill and found some flat ground near a river runoff.  There were a few more insects than the previous night but it was still pretty comfortable.

The next day I was planning on reaching Hiroshima where I would be staying with a friend from when I was an English teacher in the area.
So I woke up the next morning and made good time, passing through the town of Iwakuni which is famous for it Kintaikyo bridge, which is around 400 years ago but was sadly being restored when I passed through.

Luckily I had seen it before…

Further round the coast I went past Miyajima one of Japan’s most sacred islands and famous for the large red Toriii gate in its harbour. 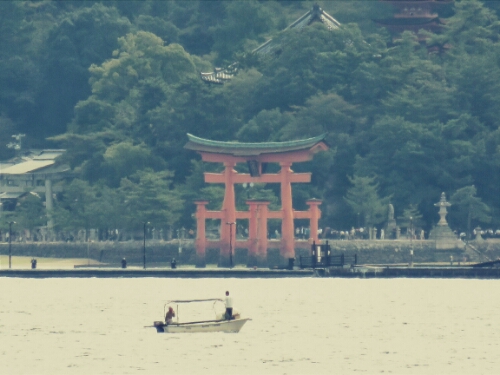 After Miyajima I reached Hiroshima with quite a few hours to spare before my friend was finished with work.  This gave me some time to look around and reminisce about when it had been the nearest city to where I lived.

I also went and visited the Peace Park, built as a reminder of the horrors that mankind can visit on each other in times of war.  I had forgotten how effecting it could be to visit it as it had grown quite familiar when I had lived nearby.

The A Bomb dome is particularly hard hitting, a building close to ground zero gutted by the blast and preserved as a shell as a reminder.

In spite of its sombre subject the Peace Park also serves to remind how quickly Japan bounced back from the war surrounded as it is by the once again thriving city.  There were also scores of Japanese school children visiting some of whom had been tasked with practising their English to make it clear that people should remember the past but be glad there is a future.

After some time in the Peace Park I went and had lunch trying a Hiroshima speciality: okonomiyaki.  I have variously heard this described as a Japanese pizza or pancake neither of which really sums it up.  Either way it is delicious.