We departed Luntai a little later than we would do normally so as to take advantage of the comfort of the hotel room and the inclusive Chinese breakfast buffet, which while filling left me craving cereal quite badly.
Luntai was in another oasis like green area that we got to ride through for a large part of the day, which is always a bit more attractive and interesting than the desert lands.  We could also see the Tian Shan Mountains in the distance as we rode along. 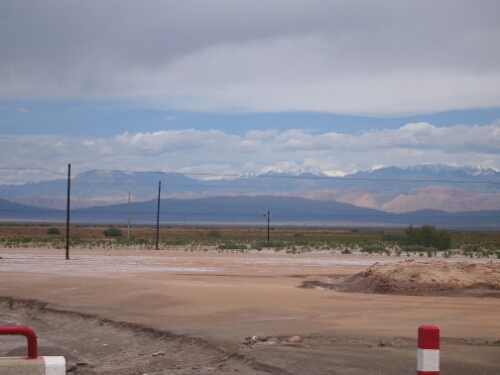 While riding we saw our first other cycle tourist for quite some time (I see Meka everyday), it was a Chinese guy who didn’t speak English so we don’t know what adventure he was off enjoying. 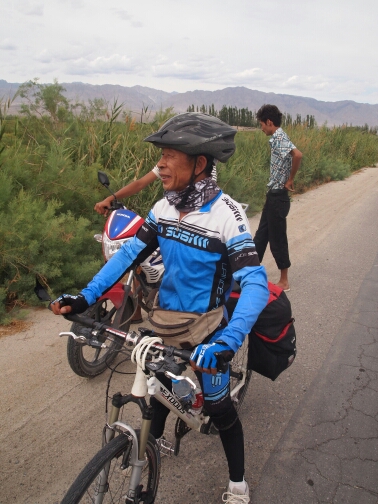 Towards the evening we burst free of the fertile area again and were once more riding in desert lands.  At one point off to one side we could see what looked to be a whole town being built practically from scratch.  There were massive empty apartment blocks being erected and shop units and so forth.  The scale of building work in China is incredible and the speed at which stuff must go up makes the mind boggle.

Once again we camped by the side of the road in the desert. 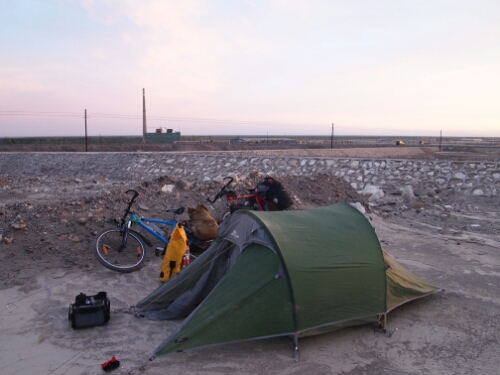 To make up for the unattractiveness of our pitch nature provided us with a rather beautiful sunset. 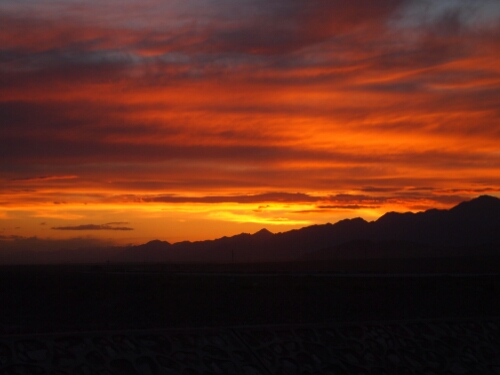 Setting off early we made it to the next major city of Korla, which had clearly seen a lot of recent development as had the other large cities along the route.  Here we stopped and had lunch, playing menu lottery by pointing randomly at dishes.  Thankfully we both ended up with passable noodles and ate with relief rather than disappointment.  While there, a Chinese high school girl came and tried to practice her English, she was so excited at meeting foreigners that she nearly exploded hopping from one foot to the other as she tried to remember her phrases.  Her mother also treated us to a weird Chinese jelly dish which I enjoyed rather more than Meka.
That day we would be turning north off the highway and heading up into the mountains on what I expected to be the scenic route. 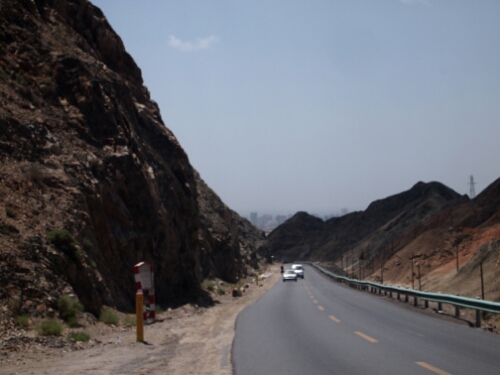 Unfortunately as the day continued it started to rain a persistent miserable drizzle and as we started to look for somewhere to camp we were feeling a bit down too.  In the end as we couldn’t find anywhere suitably secluded we asked a farmer if we could camp in his front yard.  Meka gamely struggled with his almost willful lack of understanding and it as only through the intercession of his teenage son that she made herself understood.  Once it was clear we only wanted to put our tent up and not do I don’t know what he was quite happy for us to camp and he brought us water as well. 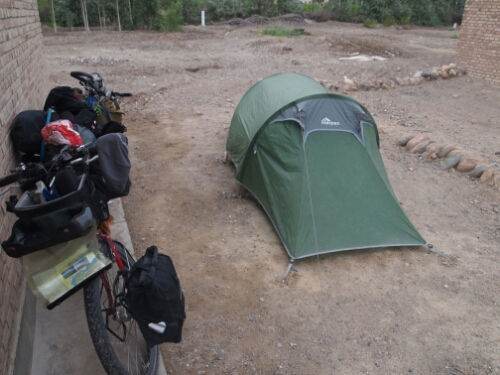 Leaving the farm the next morning with slightly better weather we began climbing more earnestly and as we did so the landscape changed and became less like a desert and more lush.  There were also camels again for no apparent reason. 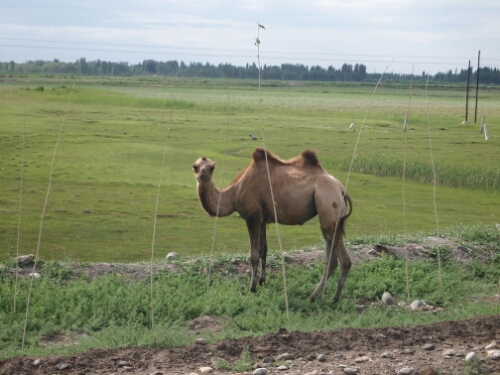 Carrying on up we eventually reached a town where we could get some lunch.  Just in time as well as a massive thunderstorm broke shortly after we arrived.  Rain came pummelling down and the cafe lady was kind enough to let us bring our bicycles inside it was so strong.
After that we carried on and changed road, which we didn’t expect to be a problem.  The roads had been pretty good so far in China and we hadn’t expected this to change.  We were quite surprised then when we went from pristine tarmac to potholed muddy track; potholes now filled with water from the storm. 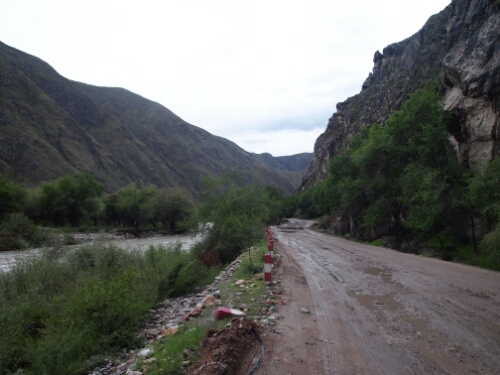 Also in spite of the road being awful there were still a lot of Chinese trucks thundering along it.  In fact it is probably because of the trucks that the road was so awful.  All this made riding slow going and a lot tougher than we had expected.  The only pluses were that the scenery was at least very beautiful and it was cooler as we got higher.
That night we found our first grass to camp on in China as we pitched up in someone’s pasture by the side of the road. 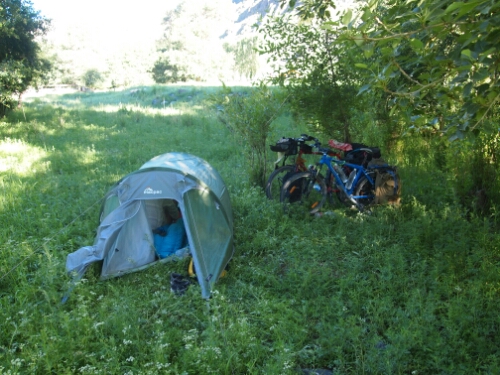 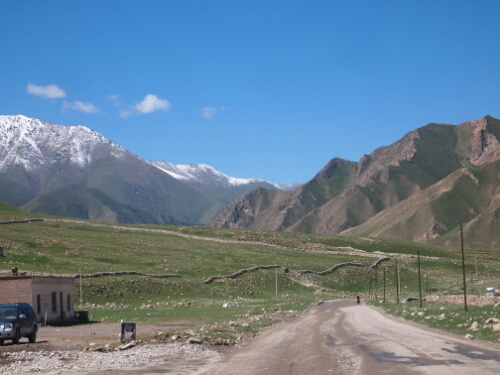 We were high enough again for there to be snow capped peaks.

We stopped for an early lunch at this funny cafe. 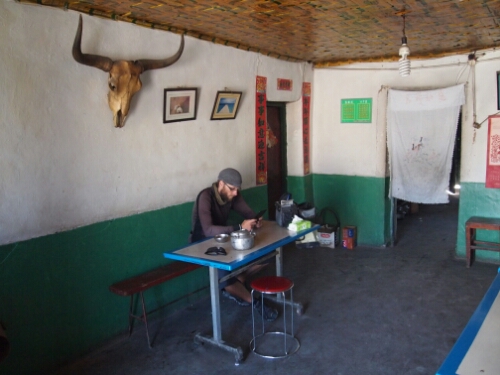 Shortly after this Meka took her second tumble from the bike on the trip and reskinned the knee she had skinned a few days previously because of the awful road.  As a result of this instead of carrying on up over the high pass to Urumqi as planned we took a detour and headed east instead of north on a new tarmac road that we reached the beginning of.  This added a few kilometres on but meant we were travelling much faster.
We still had a big climb to make and ended up at about 3200m at the highest point. 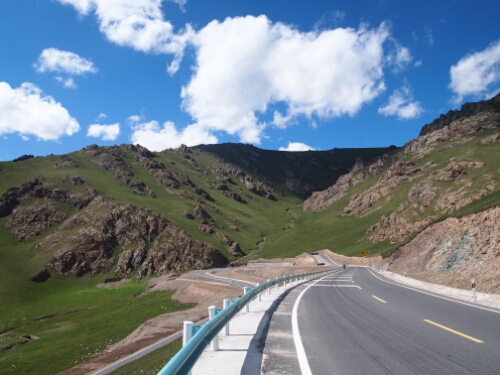 They have yurts in China too. 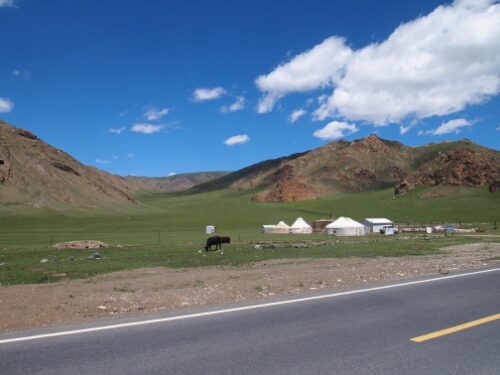 After we’d taken the turn we had ended up on mountain grassland similar to parts of Kyrgyzstan but at the same time very different.  There were a lot more permanent structures and evidence of development in the Chinese grassland.
For instance as we had been climbing there had been a railway line rising up the mountain with us and it must have gotten up well above 2000m. 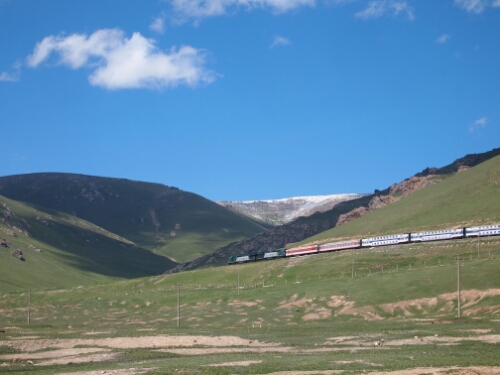 And it was amazing seeing it running in and out of tunnels through mountains for hundreds of kilometres.

At the very top there was a very strange Buddhist shrine that people were driving up to visit as we arrived.  Offerings of food and drink were thrown at it and flags and so forth tied to it for prayers. 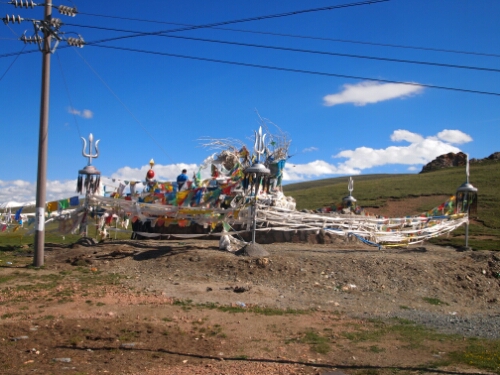 After the shrine we started a very long very beautiful descent, which felt great after all the struggling we had done over the past couple of days. 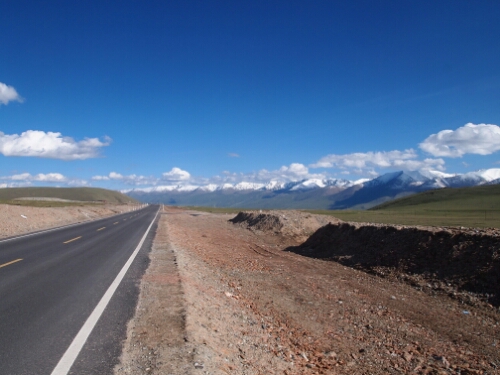 As we descended we saw strange structures that might have related to the ancient Silk Road that passed through here or might not.  There was not a lot of tourist information lying around.

By the time darkness started to fall we had still not finished descending so we tried to find somewhere to camp.  After one abortive attempt we eventually found somewhere on a nice flat piece of grass with some trees for cover. We did have to ford a small stream in order to get to it which was a bit more effort than normal. 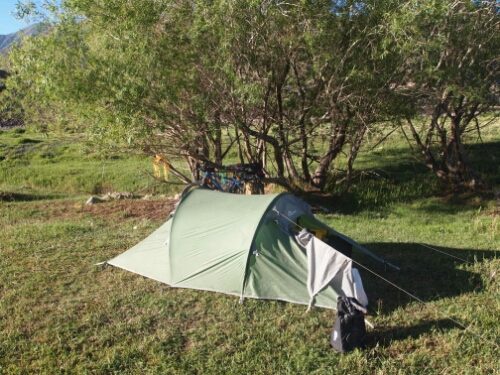 The next morning it was all down to start with, for another easy beautiful 50km.  Descending like that is great, you can just sit back and let your bicycle roll down while taking in the view.  The gradient was not so steep that it required laser like focus to make sure you didn’t go whizzing off the road, that had been yesterday when we had begun riding down.
We eventually reached the bottom and from here I expected it to be flat to Urumqi or still a gentle down.  We were thus somewhat surprised when we started climbing and kept on climbing and in fact ended up doing so for about another sixty kilometres.  What we had expected to be an easy day turned into a very hard one.
Not only were we climbing we had ridden out of the green on the last mountain and were now riding up through barren desert.  It was really barren as well – there was no human habitation for kilometres and most of the way it was just us and the trucks. 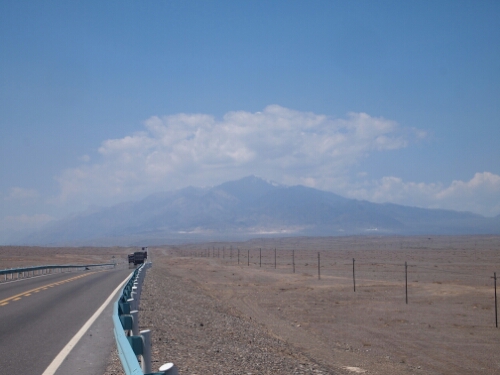 The road was incredibly frustrating as well as it snaked across the landscape in huge switchbacks to keep the gradient low so that the trucks wouldn’t build up too much unwanted speed. In the end we went past the mountain in the photo above somewhere on its right after riding back and forth in front of it for hours.
It was also hot and we were drinking more water than we had expected and there were no options for getting more apart from flagging down a truck.  There was also little shelter and we ended up taking a break in a storm culvert to let some of the heat get out of the air.  We just had to keep on riding and hope we’d eventually get to the top and that our water would hold out.
Thankfully as the evening drew in and we got higher it cooled a lot and eventually we climbed past the desert and were once more amongst grassland.  Eventually we reached the top at about 2600m where there was a plateau with a small town, which was more of a big truck stop.  Here we gratefully got more water and stuffed our faces with food.  We hadn’t had anything proper to eat all day and had got up the mountain eating dried fruit and nuts and Chinese snacks.
After filling our stomachs we rode through the town to find somewhere to camp for the night – luckily it was pretty empty up there and we were able to find a nice spot. 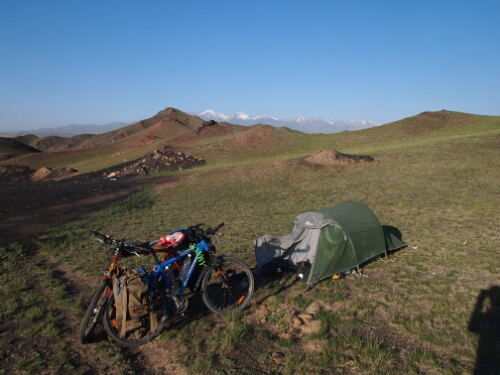 Waking up we were expecting that today we would definitely have an easy ride down into Urumqi finally.  Both of us were excited for showers as we pretty filthy after five nights camping.
Sadly the road did not make things easy for us.  The descent was made difficult by a bad road with a lot of potholes which meant we had to sit on our brakes.  At one point for about 8km it disintegrated completely and became a rocky mess with no tarmac to be seen.  Instead of flying through in about 15 minutes we ended up crawling down bouncing up and down uncomfortably in over an hour.  What was worse was the dust the trucks were kicking up, sometimes it obscured the road completely  and was making us even grubbier, which I had not believed possible.
Luckily it was beautiful, with pretty little valleys and interesting rocks. Including this one which we would have missed if a Chinese tour bus hadn’t pulled up to take photos: 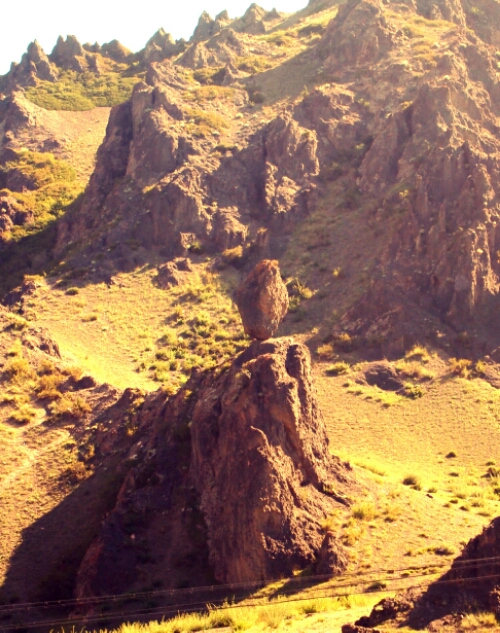 It was about twice the height of a man and seemingly standing without support.

The road eventually improved and we were able to make better time down to the city. Riding past more randomly placed camels. 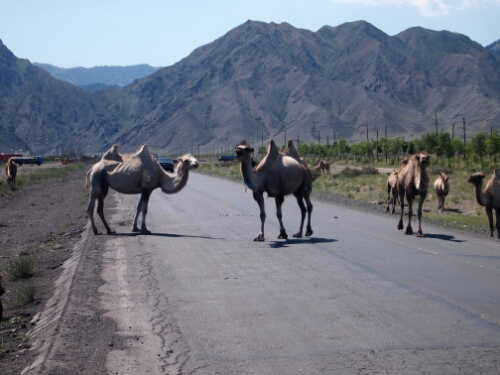 Finally we made it off the mountain and into the suburbs of the city.  Sadly our day wasn’t over and due to road works we ended up having to fight along a dug up road towards the middle of the city, with more dust and trucks.
So instead of an easy descent to Urumqi we had to struggle for five hours to get there.
In the end it was worth it and we got our showers.

One thought on “Luntai to Urumqi”