Leaving Penang I continued my way north towards Kangar, where I would spend my last night in Malaysia.  It was an uneventful days riding, with only the heat to contend with in the afternoon.  Otherwise the roads were good and snacks and drinks were readily available from the modern petrol station shops or 7/11s lining the road every so often.
Riding in Malaysia had been pretty easy with everything you need for cycle touring readily available, it was certainly a far cry from Central Asia or even India where things had felt more challenging.  As one friend put it: ‘You’re basically on holiday now.’  Which would be perfectly true apart from the occasional few hours cycling in temperatures above 35 degrees.  Other than that though everything else was definitely a lot easier.

For my final night in Malaysia I stayed here: 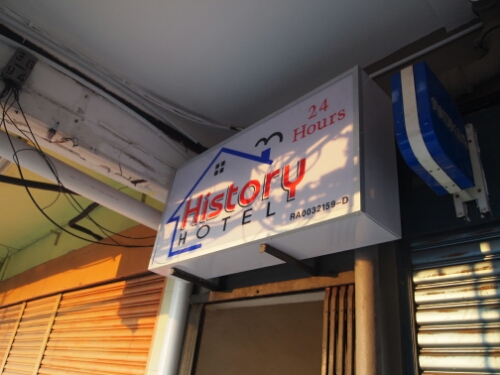 I have no idea why it was called that, though some of the wiring was definitely from a different age. 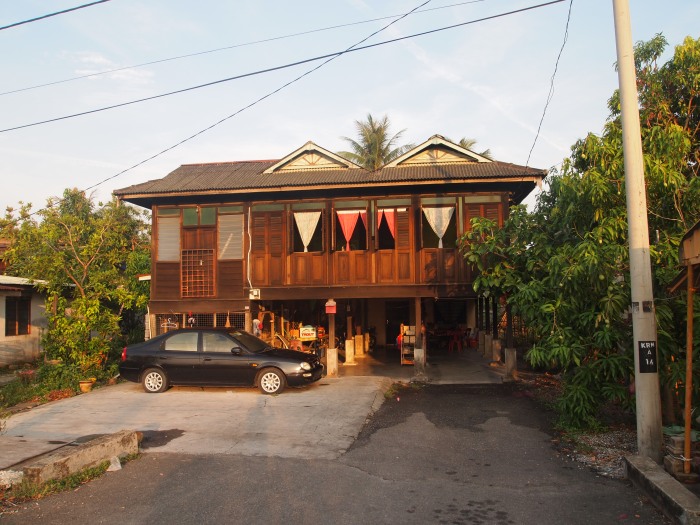 At the border everything was fine and I went through it pretty much as I had at every other land border apart from the Singapore Malaysian one.  The border staff on both side were very nice and I got a thirty day entry for Thailand which I was relieved about.  It is only in the past few months that people crossing by land have been able to get 30 days instead of 15 and I hadn’t been able to find anything from an official Thai source confirming this.  It is apparently only for citizens of G7 member states as well, so some New Zealanders I met in Penang still needed to get actual visas so they could have longer than 15 days. 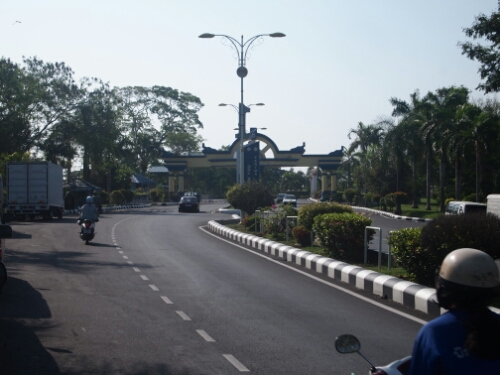 Between Malaysia and Thailand

Riding into Thailand I was pleasantly surprised to realise that they drive on the left as well.  For some reason I had thought that it was only Malaysia and Singapore that did in this part of the world. 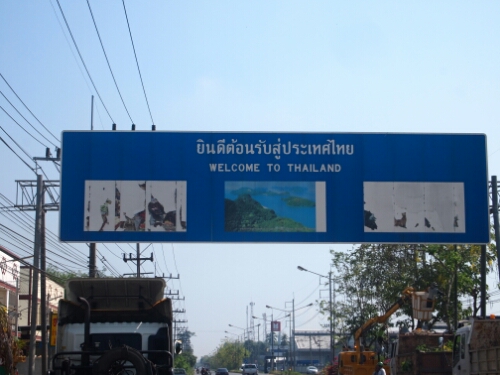 In Thailand it was immediately apparent I was in a different country (apart from big signs telling me so).  Everything was written in another alphabet for a start.  Also instead of mosques lining the road there were now Buddhist Wats (temples) which certainly had a lot more gold trim in parts. 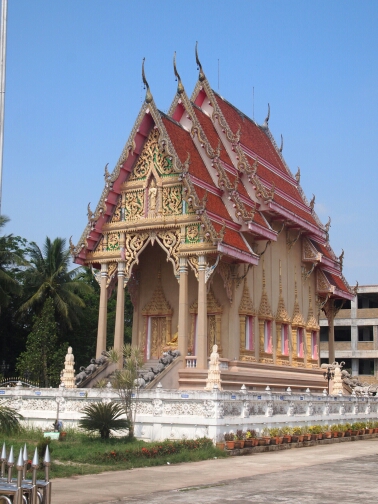 and of course Buddhas: 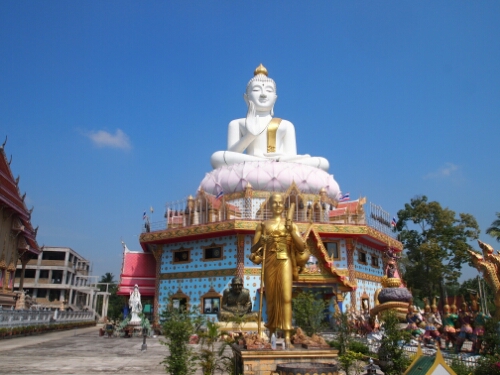 The driving was worse too.  Not a lot worse but noticeably a bit more reckless.

Leaving Hat Yai I made for Phattalung where I had arranged to stay with a warmshowers.org host.  As these two places were only about 100km apart I could take it easy on the way over and even do some sightseeing.  Thailand has lots of tourist signs pointing out nearby sights like waterfalls or hot springs, so I decided to follow one that said ‘Hot Spring, Cold stream’ mainly because a cold stream to swim in sounded awesome at that point.

I rode off down some Thai back roads which were thankfully still of excellent quality and after asking directions a couple of times found my way to the Hot Springs.  These were a bit disappointing as the water was dirty and only a couple of children were playing in them.  Anyway they were hot and the last thing I wanted was hot water at that point…  The setting though was beautiful as they were up against a mountain that reared cliff like up out of the ground. 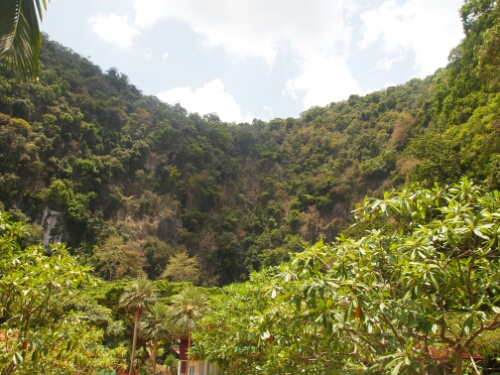 The cold stream was even more disappointing when I found it, as the water was even dirtier and there weren’t even children brave enough to swim in it.  At least it was pretty again. 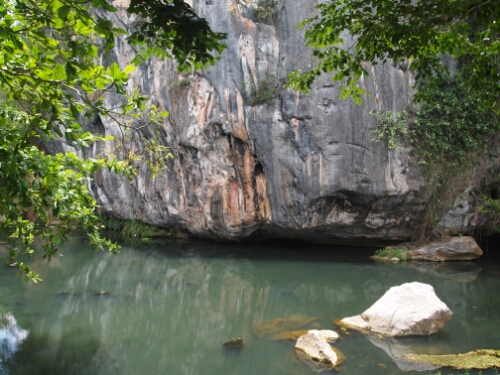 Having killed a bit of time I headed off to my destination and eventually found my host Pad, who lives in a very rural area with his wife On and lots of animals.
Pad was really hospitable and immediately made me feel very welcome and comfortable.  Offering me a shower and something to eat as soon as I arrived.  His house was very nice and different from anything I had stayed in before.  There were two floors but part of the second was set on stilts and the area under this was the main living area, where the kitchen, dining and living room equivalents were.  There were no walls round this part so the jungle felt very close!
Pad’s wife made a delicious Thai dinner including Tom Yam soup and some interesting fruits I had never heard of before for dessert.  One was like a rubbery grapefruit and the other was like nothing else I have ever tasted.  It looked like an alien as well: 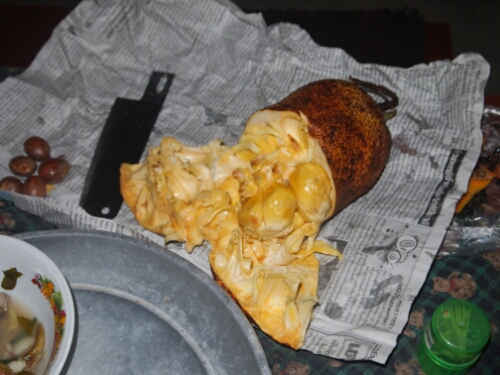 I also ate rice that Pad grew in his own fields.  A lot of what they ate or used round the house they made themselves.

The next morning I was sad to leave as I had felt so welcome and relaxed there even in such a short time. 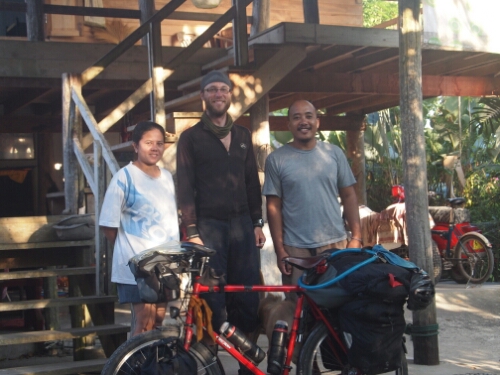 That day I was making for Nakhon si Thammarat which is one of the most important cities culturally in the south and where I was planning on spending a couple of days.  This is because I knew that Songkran, the Thai New Year would be falling soon and I wanted to be in a city and off the road for it.
My first day in Nakhon I spent seeing the sights – there are not many but they have a few very nice ones.
The most famous is the most important Wat in south Thailand.  This was really beautiful and impressive.

Apparently there is also a lot of Brahmin influence and I saw some Brahmin temples and shrines: 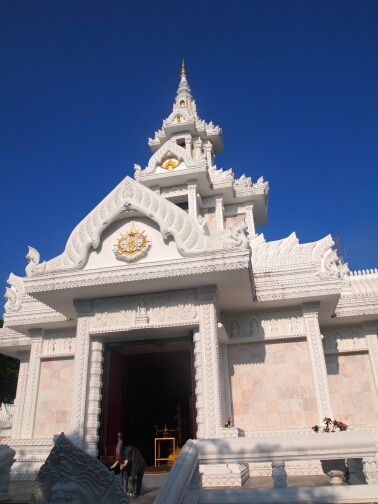 Nakhon is also known for having a famous Thai Shadow puppeteer and I visited his house which is also a museum.  This was interesting as they had some displays of the puppets: 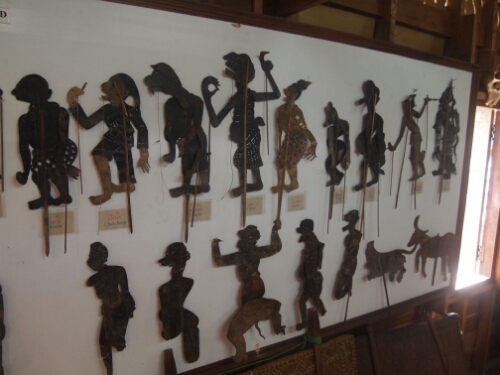 And a nice lady showed me how they made them: 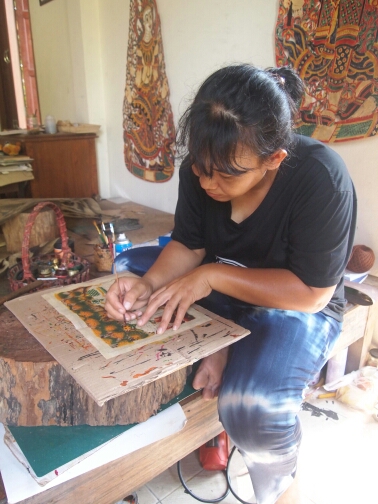 The next day it was time for Songkran and I had prepared myself after hearing quite a few stories.  Apparently the most obvious tradition relating to this festival is the splashing of water on people as a blessing.  I assume in the past this was a bit more staid, now it involves groups of people standing by the side of the road with huge tubs of water and splashing anyone who goes past, or shooting them with water pistols. 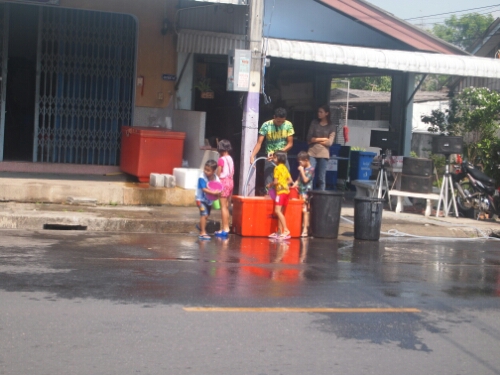 The first time I went out in the morning it was mainly children doing the splashing.  By the afternoon the whole town was in on it.  Hundreds of pick up trucks were driving round – these were loaded with people tooled up with water pistols and buckets and throwing water on passersby and other vehicles. 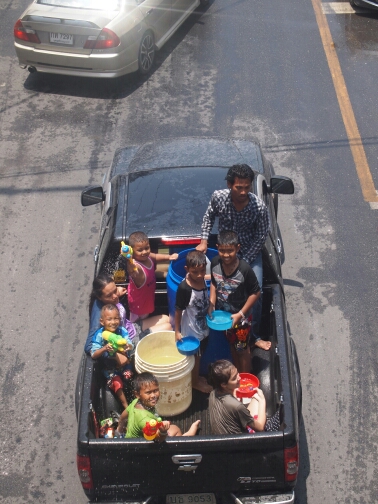 Most people seemed to keep the water in tubs, these guys had decided just to fill the whole back of the truck: 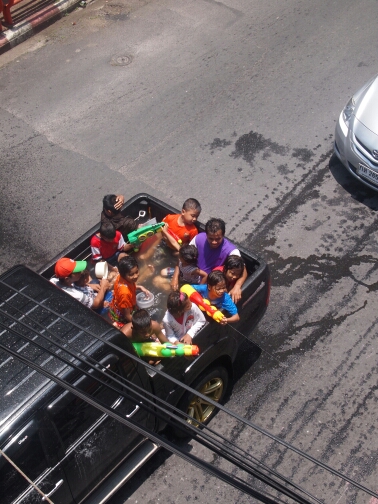 It was all very good natured and everyone was having a great time. 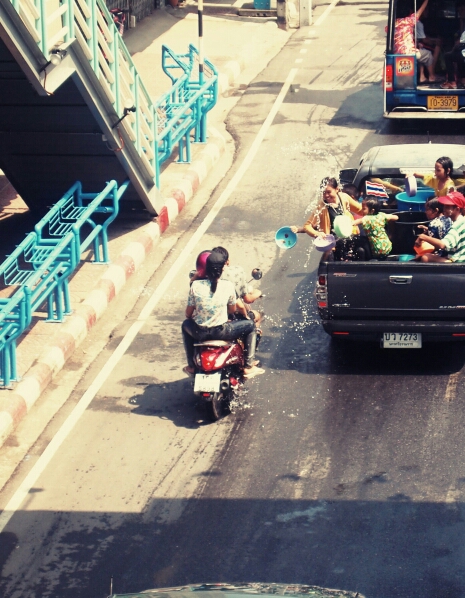 On the side roads off the main road the water fights got really crazy with people using hoses and water flying everywhere.  I couldn’t get any pictures of these as my camera would have been soaked in about two seconds.  Walking along here I felt like I was taking a shower in the street.  As one of the few foreigners around everybody was very keen to bless me and and it did not take long for me to be blessed through.  Luckily as I said I was ready and was wearing beach clothes and had all my stuff in a waterproof bag.
Similarly to Holi in India people would also smear coloured paste on others as a blessing and I got thoroughly blessed in this way too, at some points people were almost queueing up to smear my face. 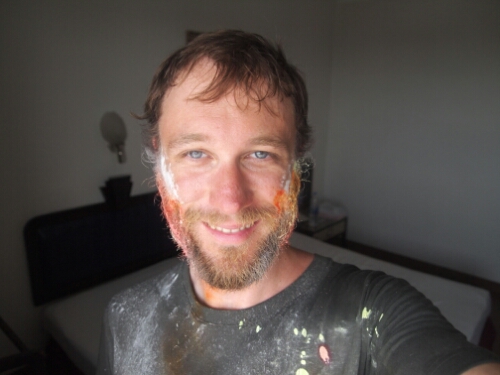 I can only imagine what I would have thought if I hadn’t realised the festival was going on…I was told in the north it can go on for days but in the south the water fights would only be on the first day.  Whether or not this is true I will out when I leave the next day.