My last couple of days in India were spent getting ready for the flight to Singapore and eating.
Getting ready for the flight involved buying a large bag to put my panniers and stuff inside and packing my bike up with the help of a Chennai bicycle shop.
Thankfully neither was particularly difficult and the bike shop was able to find a box that fit my longer than usual bike.  This was a lot better than one I’d used flying from Almaty to Delhi – that had basically been two boxes duct taped together and it had sagged somewhat in the middle.

The ride back from the bicycle shop to my hotel was a bit nerve inducing as it involved loading the box with my bike in it on the roof of a tuk tuk and I wasn’t a hundred percent sure it was still going to be there at the end of the journey.  Thankfully as in every case to date it survived.

Apparently this procedure was not exactly legal and I wouldn’t be able to repeat it for the ride to the airport the next day.  I would actually have to get a real car for that drive which would be a bit more expensive but safer at the least.  Well I thought it would be safer – given that the box was stuck in the back across the boot and over the rear seats it probably wasn’t.  At least on the tuk tuk if there was a sharp braking manoeuvre it would be box we lost – in the car any sharp braking could see the box flying through the vehicle and taking our heads off!

In Chennai I’d gotten to eat a lot of south Indian food like dosa and idly but I also had a lot of one of my Indian staples: Tandoori chicken.  I must have eaten quite a few whole chickens over the course of the trip as the tandoori chicken was one of the less spicy and most easily recognisable meat options available.

My time in India was pretty much done and I was looking forward to heading across to South East Asia and visiting a couple of countries I had not been to before.  I would be flying with Tiger Airways as they had a good policy for sports equipment including bicycles and it wasn’t too expensive to fly with it.
It was only when I got on board that I remembered that this was a no frills flight and that if you wanted to buy anything to drink or eat on board you needed to pay in body parts – after India it felt even more expensive.

Everything else about the flight was fine and I even arrived into Singapore early.

Then straight from landing it felt like I was in a different world.  Everything was extremely efficient and extremely modern.  My luggage and my bicycle were waiting for me once I had cleared immigration, which was very quick.  Then I went to get a taxi and I learnt I would have to get a maxi cab for SGD 60 or GBP 30, which showed that efficiency and so forth came at a cost.  I managed to get a cab for SGD 10 less by riding with an unofficial driver who was hanging around in the concourse looking for a fare to take with the minibus he had dropped people off at the airport with but with no planned return passengers.  There would definitely be no attaching my bike to the roof of a tuk tuk here.

In Singapore I would be lucky enough to be staying with my cousin and his wife and it would be great to not be in a hotel for the first time in five weeks.  The ride across town from the airport made it even clearer that I was in a different sort of place than I had been for months and months.  There were skyscrapers everywhere, the roads were beautiful and smooth and the traffic flowed like silk. 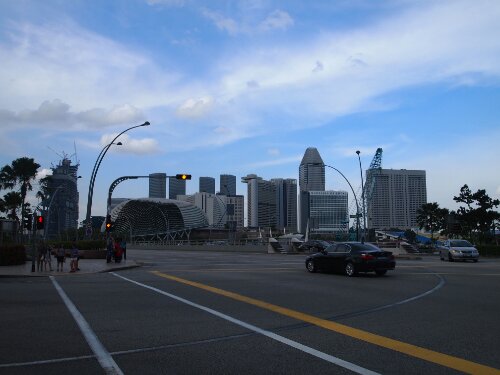 And to me it seemed blissfully quiet.  There were no horns blasting away causing my head to throb and definitely no vehicles coming at me the wrong way down the road.  It also looked like you could eat your dinner off the pavement if you were that way inclined.

I would end up spending three days in Singapore and having a very nice time.  I managed to get my bike fixed up with some new components that hadn’t been available in India and that I hadn’t seen a similar quality to for about 9000km of riding. After putting it back together of course…

I also ate some really great food, with my cousin and at the Hawker food stalls in Singapore.  While I enjoy Indian food it was good to have something a little less spicy. 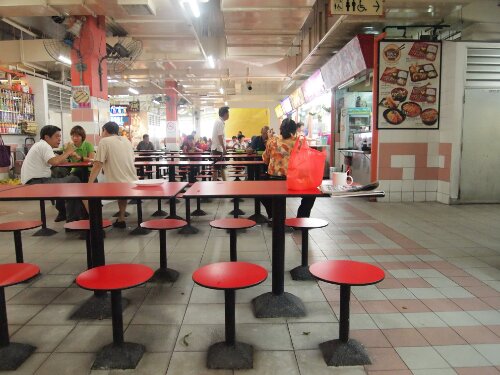 Singapore seemed to have a very eclectic mix of cultural influences with Chinese: 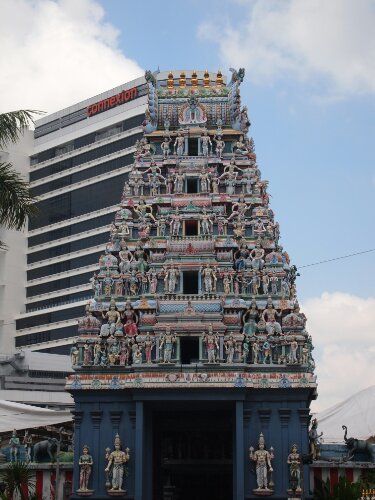 elements all set against a back drop of ultra modern buildings. Including this one that seems to have a boat on top:

Having been travelling through central Asia and India for the past four months, what really struck me about Singapore was how developed it was.  While there was a lot of development still going on, this all seemed to be extra or improvements.  The city itself seemed finished in a way that no where I had been to for a long time had felt.  The pavements and streets didn’t just become mud if you went down a side road – I didn’t have to keep my eyes open for uncovered man holes.  Everything was tidy and clean and I could drink the water from the taps.  It felt planned as well, with the roads and public transport system seemingly able to cope with the level of traffic.  There were also parks and greenery everywhere.  Of course all this efficiency and cleanliness came at a cost and Singapore was also easily the most expensive place I had visited since Europe.  For a few days though, it was worth it!