After  a couple of days getting acclimatised in Delhi it was time to head out and start riding round India.
It is hard to describe how nervous I was about riding out through Delhi.  The driving I had experienced in the city had been crazy thus far and I was not looking forward to experiencing it from a bicycle.  There was no point putting it off and when the morning I had decided to leave arrived I woke extra early so that I could start riding at 7am.  I figured that going earlier would mean that the roads would be less busy and easier to negotiate. 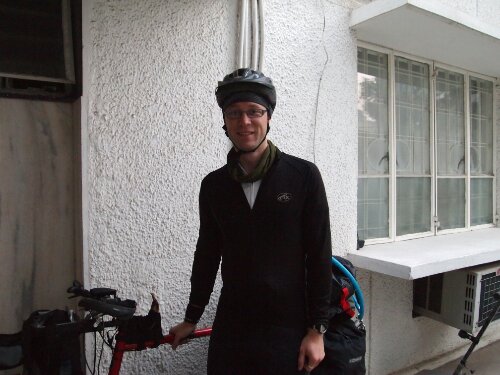 I only wear a helmet when I'm really afraid...

Thankfully this was the case and the nightmare I had envisioned did not transpire.  The roads didn’t get really busy until later and by this time I had gotten the hang of the traffic, which wasn’t much worse than riding in a Turkish city anyway.  Also drivers are used to cycle rickshaws, bicycles with three people on and bicycles being pushed with enough goods to fill a supermarket loaded on them so they are used to avoiding ungainly slow moving riders!
Googlemaps did throw me one curve ball as I tried to go down a road that was being totally rebuilt and I ended up having to carry my bicycle over train tracks and walk it down a narrow muddy alleyway.
Perhaps the weirdest part of leaving Delhi was when the road disappeared almost completely for a stretch.  One moment I am flying down a beautiful pristine four lane highway, the next I am trying to negotiate what you could barely describe as a muddy track.

Throughout the first day the roads kept throwing up surprises and I managed to ride on pretty much every surface possible, including highway, mud, gravel and just set tarmac.
There were also monkeys:

And trucks so heavily laden you could barely see the truck: 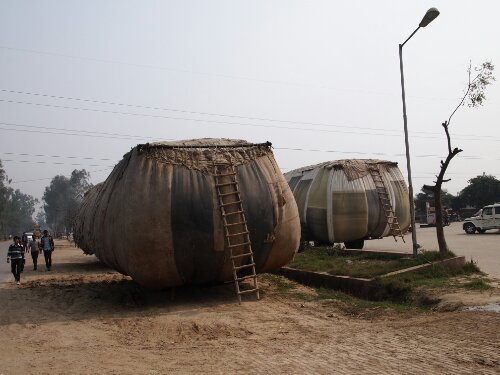 I also ended up in some interesting places a wrong turning taking me on a detour down a dirt track through villages where people were really quite surprised to see me.
Googlemaps also sent me through the middle of the windy narrow old city of Gohana where people were again bemused by my presence.

Due to the combination of a much lower luggage weight than before and very flat often smooth roads I was flying along and made very good time on the first day.  I was able to stop earlier than I had expected having done about 40km more to get me to the town of Jind.  I found a guesthouse and was reminded that in Indian hotels cleaning is optional and they had decided against it in this case.  Still it was cheap and the family who owned it were kind.  They told me I was not the first foreigner to have stayed there – a year ago a French doctor had also done so apparently.  I imagine they now have plans to put ‘International’ in as part of the place’s name.

Riding in the warmth and the sun that first day had been great and I’d got some tan back.  Sadly the weather said it would rain throughout the night and into the next day, so I steeled myself to deal with that.
The forecast was wrong fortunately and it only rained a little in the night so I was able to spend the next day dry albeit under cloudy grey skies.  I also learned that trying to dry clothes by securing it under the straps on your luggage is not the best tactic in India.  After about an hour riding in the dust and mud of the Indian roads the socks I was trying to dry were actually dirtier than before I washed them.

The first day I had been riding through the state of Haryana a predominately Hindu area with mainly Hindu temples.

The second day I crossed the border into the Punjab, the majority Sikh state in India, where Gurdwaras are more common. 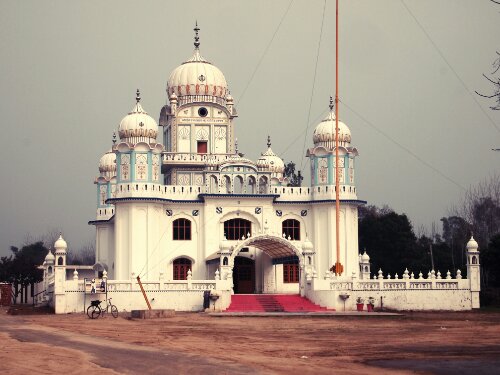 Still the landscape hadn’t changed much and I was still riding through the same flat farmlands, punctuated by the occasional brickworks. 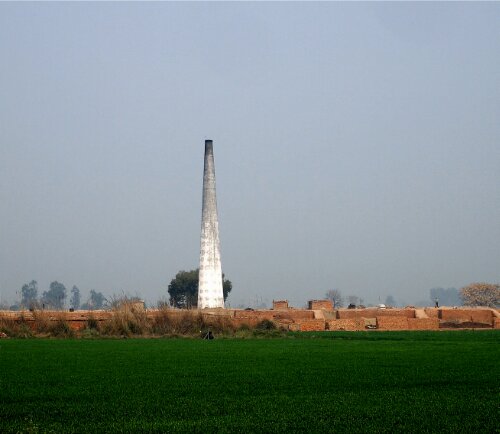 That day I would reach Sangrur, a small town of little note.  By the end of the second day I realised I should have taken it a bit easier getting back into riding.  Bashing out 260km in the first two days having only ridden 3 days in the past 30 was not wise.  The muscle on the side of my right knee was swollen from overuse.  Happily slapping on some Ibruprofen cream meant I was able to ride the next day.
Again the hotel I had selected was cheap and notable for its custodians’ aversion to cleaning.  Again their niceness made up for this.

The small guys on the right worked there. I don't know who the third guy is.

While riding I had been getting a lot of attention.  Many people would pull me over and ask for a ‘snap’ with them.  Including this group of boys: 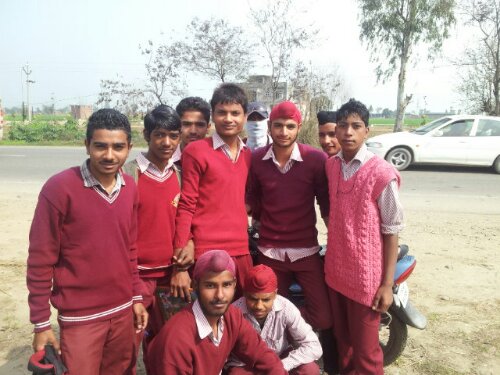 And these guys too:

One group even handed me their child to be photographed with, luckily I didn’t drop it.
Many motorcyclists would also pull up alongside me to ask as best as they are able where I’m from and where I’m going.  While this friendliness is nice, India’s national highways are perhaps not the place for vehicle to vehicle chatting.  Especially not when heavy goods vehicles are passing and there is all manner of rubbish at the side of the road I need to be avoiding!

Most people have been very friendly and while when they first see me their initial reaction is to stare with dead eyed wonder. But as soon as I smile or wave they usually snap out of it and their faces break into big smiles and they wave back realising it’s just a person on a bicycle, albeit a very weird looking one.

On the third day I continued through the Punjab seeing the occasional incredible Banyan tree.

As mentioned the landscape in this area is very flat and it is overall quite monotonous.  If there weren’t so many crazy things happening on the road it would probably be very boring.

The mornings of the third and fourth day were both very misty and visibility was way way down.

Luckily everyone (about fifty percent) uses lights and everyone (no one) drives more slowly and carefully so it wasn’t scary at all (it was pretty nerve wracking) riding in the fog.

Houses in this area often have interesting sculptures atop them; popular ones being footballs or giant birds: 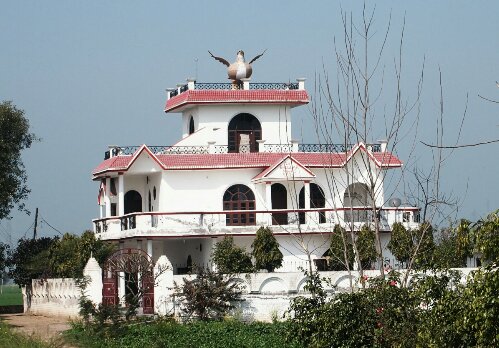 The most impressive buildings I see as I ride are either schools or marriage venues.  The schools are very impressive and I’ve seen many new moderns ones dotting the countryside as I have been riding.
The marriage venues are also quite something:

That is actually quite a low key one, the more impressive ones tended to be set back from the road or in use.
There did seem to be a lot of people getting married over the four days I rode out of Delhi.  I assume either a lot people are getting married all the time or it is just the season for it as the weather is very good.

I was quite surprised by how good the ride was for the four days.  I had been expecting it to be tough and from reading on the internet I was prepared for semi impassable roads and even bandits.  In the end the road was great about 95% of the time and if there were any bandits they were very subtle.  I covered ground as fast as on any roads I’d ridden so far.  This was helped through slipstreaming: India is great for slip streaming.  There are lots of slow moving large vehicles that are still going faster than me, that I can slip in behind to eke out up to 10km more an hour.  I slipstreamed tractors with trailers, tuk tuks and small trucks often to the amusement and always to the bemusement of their passengers.

I was thus able to arrive in Amritsar about a day earlier than I had planned and early in the day too.

So I was able to nip along and see the Golden Temple, Sikhism’s holiest temple on the evening I arrived. 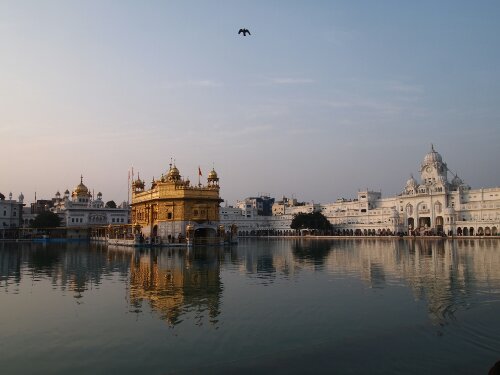 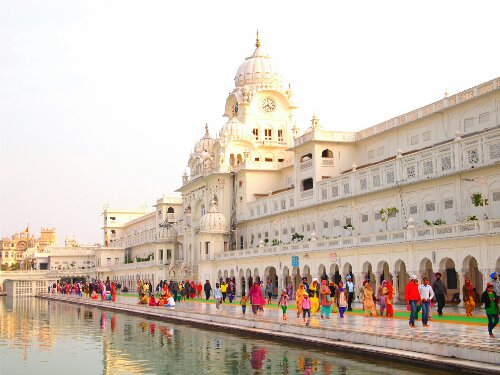