I have ended up staying in Bishkek rather longer than I had expected.  Initially I thought I would be here for a couple of weeks to pick up a new Kazakh visa and an Indian one.  At the time of writing I have been here nearly three weeks and this is the longest time I have spent anywhere.

The extra week is due to a combination of factors which now include heavy snowfall and unpleasantly cold weather, which I hope will improve in the next few days.

Bishkek is definitely not the worst city I could have been stuck in. For a start it is pretty cheap.  I’m staying in a nice hostel for around GBP10 a day, beer is roughly GBP 1.10 a pint and it is possible to get a good meal for GBP 3.

That said it isn’t the best city to get stuck in during winter either.  The weather is pretty awful, with quite a lot of snow and quite often extreme cold.  As I write it is apparently -14C outside.  Also there are not that many sights to see within the city – a few statues and old soviet buildings. 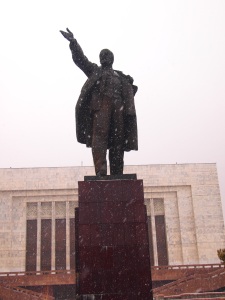 Apparently the largest statue of Lenin left in Central Asia

Most of which I have been too lazy to photograph.

There is also a large market called the Osh Bazaar.  I haven’t been as I’ve seen a lot of bazaars and I am guessing it will be the standard collection of foods and rubbish goods that I don’t really want.

While Bishkek isn’t a particularly attractive city this does not hold true for the rest of Kyrgyzstan.  I have taken a couple of trips outside the city and you don’t have to go far to see some truly spectacular natural beauty.

For instance the nearby national park of Ala-Archa, which is centred around an incredible natural gorge. 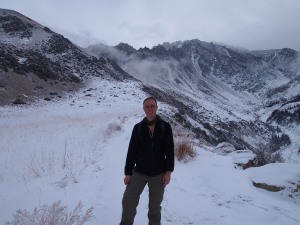 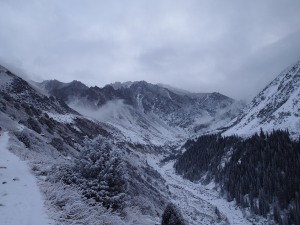 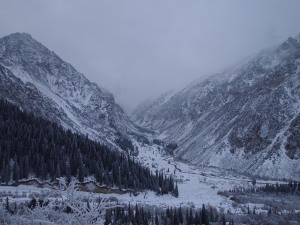 This was well worth a visit and was only forty kilometres outside of the city.

Just off the lake there is Fairy Tale Canyon. 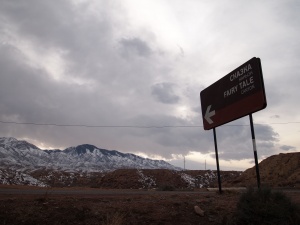 Which has landscapes that reminded me a lot of my time in Cappadocia in Turkey. 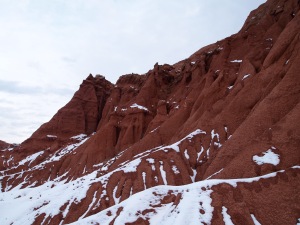 There was also a strange abandoned camp, possibly for children.

With concrete yurts as bunkhouses.

On this trip, which was organised by Iron Horse Nomads, a new tour company in the region, I stayed overnight in a village with some locals and Harry and Kirsty, an English couple who were staying in the same hostel as me and had also come on the trip.  It was a new experience staying with locals who were used to dealing with foreigners.  Every other time I had stayed with locals they hadn’t really spoken any English and had had very basic amenities/ no amenities.

The house we stayed in had two televisions, a shower, inside toilet, running water and many toys for the children.  The lady of the house was an English teacher so was able to communicate very well.  This was all new for me and meant that I got a lot more out of it than I normally would do on my own.  Also the food was fantastic and I had a meal that was strangely almost akin to English cooking as it included beef, potatoes, vegetables and even something very similar to gravy.

The next day Harry and I went for a walk around the village where we were invited in for tea by this gentleman:

As it transpired he wasn’t just very friendly/slightly weird but totally off his face drunk…nice chap though.  The above photo is pretty much the only point at which his wife smiled, she spent the rest of the time, I can only assume, berating her husband for bringing two foreigners into her home for no reason.

In the former USSR they use a specific gesture to indicate that they are drunk or if you want to drink.  This is the neck flick. Basically you just flick the side of your neck with your finger and it can get across a whole range of meanings involving alcohol.

This is where most of the people in the village get their water from. 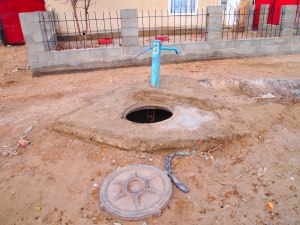 We saw this war memorial as we were driving.

Issyk Kul was a really lovely area and I think in the summer it would be even better as it would be possible to go swimming in the lake and take some time on the beaches there.  It was also nice as it was a lot warmer than Bishkek, on the other side of the pass where the lake is the temperature was around 6C whilst towards Bishkek it immediately dropped to -10C.

One thought on “Becalmed in Bishkek”