With a heavy heart I bid more friends farewell and set out from Geneva for what I hoped would be a nice relaxing day. Indeed it started well as I rode around the south side of Lac Leman along gentle roads with little gradient. I stopped in at a couple of lovely spa towns: Thonon and Evian.

They were both very well kept with lovely flowers and fountains.
In Evian I was able to stop at a market for lunch and eat it right by the lake. I then trundled off again my only worries too much sun and whether to stop and swim in the lake. Next thing I know and my back wheel is all over the place to the extent I’m wondering what I’m riding on.  Sadly it wasn’t the road, it was my first puncture.
My destination suddenly seemed a lot further away. Over an hour later I’d been stood in the sun much longer than I’d have liked and the inner tube was still expelling air. I decided I’d be better fixing it later and put a new one on.  By this stage I was pretty hot and bothered so the lake looked even more inviting than before, as it was I was next to a little beach leading on to it, so I nipped down for a quick dip.  Seemed a shame not to!
I then continued on towards Martigny where I hoped to stop that night. It wasn’t to be and I found a camp site about ten kilometres short.
Having left the lake I’d be riding up a beautiful valley along the Rhône river, there were mountains on either side and more incredible Swiss villages. By the time I stopped there were mountains all around which wasn’t boding well for tomorrow.
At the camp site I found I was lucky enough to meet Stefan, a Belgian who was also camping there.  Stefan had quite a bit more experience travelling with bicycles than myself and had a toolkit in his van that looked to weigh more than me.  He was kind enough to offer to repair the inner I’d damaged earlier and managed to do so in spite of darkness and the botched job I’d already made of it.  More valuably he gave me some very useful tips for the next time I have to do it myself!
The next morning I set off quite early as I was expecting a hard day.  For I’d decided I was going to go across the Alps rather than around them.  I’d also decided I was going to pick one of the highest passes I could find.  I settled for the Grand Saint Bernard pass, if it was good enough for Napoleon it was good enough for me.

Statistically this would involve me climbing to a height of 2469m, an increase of about 2000m on the day.  I would also be climbing for about 42km straight.  On the plus side this meant it wouldn’t get crazy steep, on the downside that’s a long long way to climb.  See here for the climb profile.
Apparently the last time it featured in the Tour de France it was classified as hors categorie, the toughest level of climb.
I’d be attempting this with around 35kg of kit and a bike that weighs roughly 15kg.
I wasn’t a hundred percent sure I’d be making it over at all let alone in one day.  By this stage I knew I could climb to a certain degree, I’d made it to a 1000m in the black forest.  This though was another order of magnitude.  I thus set out determined to see what would happen.

The day started in earnest at Martigny where I could see up towards the mountains proper. 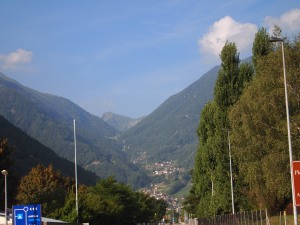 To start with it wasn’t too steep, just a relentless grind in a lower gear than normal.  Luckily the scenery was beautiful from start to finish.

Which was lucky as I’d have felt pretty hard done by if it wasn’t!

As I went up I stopped a couple of times for lunch and to air my tent and of course to rest.  I ate a lot as I went up including what must have been nearly 400gm of muesli.  The weight of which I was glad to lose. 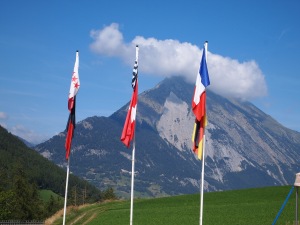 The first 37km of the climb were hard the final five were something else.  The gradient ramped up to 9.5% and I found myself having to force myself to take it a kilometre at a time.

“One more kilometre then you can rest” and so on in pretty much my lowest great trying to force the bike up. Slewing across the road and almost into the rocks a lot, luckily the drivers were all very patient.
Finally I made it to the to top, with an average speed of 8.5km an hour it had taken a while!

I got some funny looks as well as some congratulations at the top.

I wasn’t the only cyclist to have made it up there that day and I’d arrived with four other guys doing it in a group as part of a holiday with a support van. They were kind enough to give me a drink on arrival and were quite impressed I made it up.

At the top of the pass is a hospice built in the tenth century to help travellers, also a pretty lake and the border with Italy. 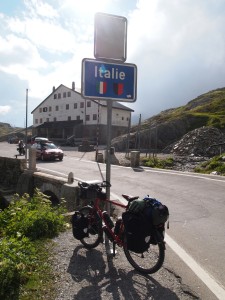 Next was the descent, if going up had been relentless grind going down was a relentless adrenaline rush…

It was at least as many kilometres down to Italy as it had been up to Switzerland and most of these were spent hoping my brakes held up. 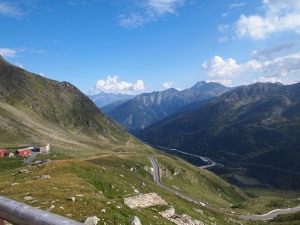 At least it wasn’t dark.

Still it was pretty exciting and I managed to get up to almost 60kph on a steep straight bit, most of the time hair pins stopped me getting any faster.

I saw some beautiful villages on the Italian side but was going too quickly to stop mostly. 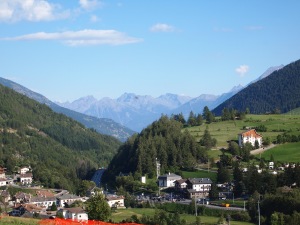 It was kilometre after kilometre of effortless down in balance to all the up, I couldn’t help but feel I’d earned it!

I eventually got down to Aoste and relative flat and bought some supplies for the night.  I then picked a village with a camping symbol by it on my map and headed for it.

Italy immediately felt different from the counties I’d been in before, for a start even though it was already early evening it was a lot hotter. Everyone seemed to be driving faster too.  Still I was in a pretty good mood which improved as I rode into the village of Fenis where I expected to stay the night. It was very picturesque overlooked by an impressive castle.

The picture isn’t great as I thought I’d have time to take a better one.  I didn’t as my enquiries with the locals revealed that the local camp site was shut and I’d have to ride ten kilometres to the next one.

I wasn’t really in the mood for this so decided to try my hand at wild camping for the first time.

The first pitch I picked I made the mistake of asking some locals I could just about see from it if it was OK.  They looked confused and seemed to be saying no… I moved on.

Annoyingly every field seemed to be covered with sprinkler systems, I assume with all the run off from the mountains they have no shortage of water for their fields.  Their abundance was making it difficult for me  but eventually I found a spot.  It was a little close to the road for my liking but was set at least 20m back so I took a risk and dragged my bike up.  I then waited for the sun to set so I could pitch up, that or for someone to tell me to move on. 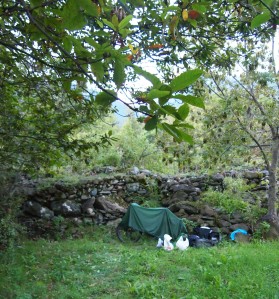 Luckily no one did and I spent an uneventful night there undisturbed except for the sound of sprinklers in the adjoining lot.

I got up pretty early the next day to make sure I avoided questions and also because I had a huge ride to Milan.  Google was telling me 170km, which I knew could be more in the event of a wrong turn.

If that all went right, given I normally average about 16kph that was going to be a long day.

Thankfully I got the easiest ride ever, closer to the start I ended up with another quite long descent out of the valley of Aoste and after that it was all flat on easily followed roads nearly all great for cycling.  I felt like I was flying along!

The only problem was the heat, it was over 30 in the shade with blistering sun.  Strangely I felt cooler riding, as the breeze as I rode kept my temperature down and my hat gives ample shade.

So the 170km flew by and I ended up doing my first hundred mile day.

I was very glad when I reached Milan and my friends Lara and Laurent.